After 20 years at the head of his farm, Àngel Peretó and Núria Erill are characterised by a clear commitment to the use of new technologies in the daily management of the farm. In this way, in 2004, they were already a pioneer farm in the use of electronic feed in confirmed gestation. However, technology is advancing rapidly, and the farmer must know how to adapt to the latest developments to get the most out of these tools. In this sense, Àngel Peretó tells us that this 2020 they have updated the entire electronic feeding system in gestation with the Rotecna Dositronic G, after the good results obtained in maternity with the Dositronic M, which they have been using for three years.

Why did you decide to commit yourself to pig farming?
My family has dedicated their whole lives to agriculture and livestock, so at the time, the possibility of continuing with the activity arose, and so I did. However, I preferred to focus on livestock and put agriculture aside.

What is the origin of this farm?
My wife and I, after deciding to dedicate ourselves to pig production, built this farm in 2000, initially with 500 sows, and in 2004 we expanded it to 1.800 sows, which are the ones we currently have.

How is the farm distributed?
We have an insemination gestation area with 500 sows, one of gestation control with 1.100 pregnant sows, a maternity area with 400 places and a weaning area with a capacity for 7.000 piglets.

Who works on the farm?
We are currently ten workers, telling my wife and me. We have two people in the gestation ships (insemination and control), two more in maternity, two workers in weaning, who also help in motherhood, one cleaning person and one maintenance person. Then there is my wife and me, who are in charge of managing the farm.

In confirmed gestation they have Dositronic G. What requirement did they intend to cover with the installation of this system?
We noticed the need to work with electronic feeding in gestation in 2004 when we started working with free sows and installed tunnel feeding machines. A few years have passed and, recently, we saw that the software this system used had become obsolete. The devices required a lot of maintenance, so we decided to make a change and go for Dositronic G. We settled for this system because in maternity wards we have been working with Dositronic M for three years now. Now we have an opportunity to unify the software design and have all the farm data in the same program.

Dositronic G installed in one of the pens. Photo: Rotecna.

How does Dositronic G work?
It is a system that allows us to create individualised feeding curves for the sows, establishing the amount of food to be dispensed depending on the gestation state and each animal's dorsal fat. With this system, it is possible to optimise the food a lot, since, if a sow is not hungry, it enters the machine and only eats the amount it wants, without any waste of food. Then, through the computer, we can see which sows have eaten and which sows have not, the quantities dispensed, etc.

Is it an easy and intuitive system to use?
It is very visual. If the rations are tracked down, on the computer and a visual check of the rooms, one can quickly check that everything works well or if any sows have not eaten.

What are the main advantages offered by Dositronic G in gestation?
To compare with other systems, for example with auto-capture boxes, you can find sows that enter a box, eat all the food there is, and then enter another box and eat another sow's ration, or, on the contrary, that a sow does not eat all the food you put for it. With Dositronic G this does not happen, since when the sow enters the box, it detects if the animal has already eaten or not, and dispenses the corresponding ration. In this way, if the sow has already eaten, the system does not give it food.

Regarding handling, what advantages does this system offer?
One of the main advantages is saving time and, therefore, personnel during pregnancy. Since the entire system is automated, it is not necessary to manipulate the dispensers daily. Once you have programmed the feeding curves, the operator should only track the quantities consumed by the sows through the computer and visually check the sows' condition.

"With this system it is possible to greatly
optimize the feed, without any food waste. "

Productively, are there improvements?
The main advantage is that at farrowing bars, there are no very fat or very thin sows since the feeding curves are very well optimised. With Dositronic G, the sows' dorsal fat states are more consistent. Besides, the fact that the sow reaches motherhood in the best conditions in terms of body fat favours that, after delivery, it has better recovery and preparation for the next pregnancy, with better ovulation and litters with more piglets.

In your case, how do you have the Dositronic scheduled?
Currently, we work with two curves, one for multiparous and one for first-timers. On these curves that we have adapted to the farm, if we see that a sow is very thin or fat, what we do is one more/less, that is, on the initial curve we apply 10% more or 10% less of its daily ration. We follow up to see how many days it takes to regain its optimal body fat status. We made these variations until day 40, when the sow returns to its initial curve and, if it has not recovered, a more/less variation is applied for ten more days. 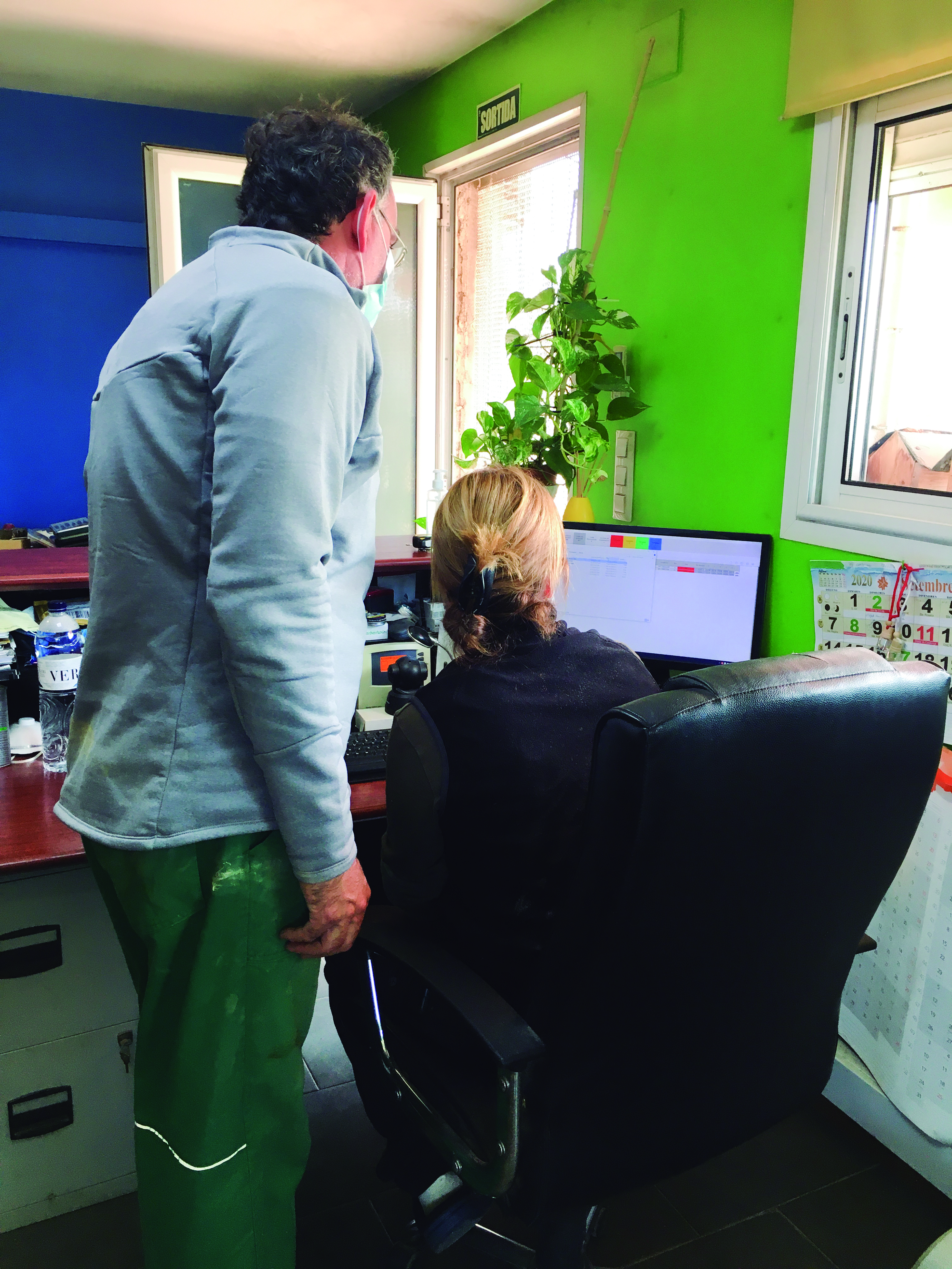 From the computer you can see which animals they have eaten. Photo: Rotecna.

What is your daily routine with Dositronic G?
Upon arrival at the farm, we perform a visual check in the room to see that no Dositronic has the alarm light on or is blocked. If everything works correctly, on the computer, we then print an incident sheet from which we track the sows that have not eaten. The first day we do a visual inspection, and the second day, if the sow has not eaten either, we enter the cage to see what happened. The most common incidents for which a sow does not eat may be that she has lost the crotale, is sick or lame, about to give birth, or has had an abortion. On the other hand, a peculiarity in our use of Dositronic G is that the sows' day changes at 7:00 p.m. We do this for various reasons; first, because, after observing the sows' behaviour, we saw that 90% of them eat between 7:00 p.m. and 8:00 in the morning, on the other hand, at 8:00 is when the operators arrive. They have from then until 4:00 p.m. to detect any incidents that may occur and look for the sows that they have not eaten. Finally, due to the way we work on the farm, the day when we move the sows from confirmed gestation to farrowing is Wednesday, so that if the sows have eaten between 7:00 p.m. on Tuesday and 8: 00 Wednesday morning, we make sure they have eaten their daily ration.

What other Rotecna products have you installed?
Among others, we have the floor in weaning and maternity, the TR5 hopper and the Swing R3 in weaning, the Clutch dispenser in gestation insemination, the Dositronic G in confirmed gestation and the Dositronic M in maternity. As for the latter, the truth is that if in pregnancy it is a product that works well, the results it offers in motherhood are outstanding, both in terms of optimising working time (it needs less personnel) and wasting feed. As the breeders who work in maternity know, sometimes there are 8 kilos in the dispenser, they are all distributed to the sow, she does not eat them, and often the feed ends up in the pit. With Dositronic M, this does not happen, and the waste of feed is minimal.

In general, what do you value about Rotecna?
Innovation. One of the reasons why a large part of the material we have on the farm is from Rotecna is because of its innovative products and the reasonable after-sales assistance, both from the company's salespeople and technicians; they always solve the problem.

At the health level, what are your main concerns?
Mainly PRRS as the most direct threat. In a more global area, we are also concerned about the ASF evolution due to the consequences that its arrival would have on exports.

What other measures do you take to reduce the risk of disease transmission?
We have a perimeter fence throughout the farm. Inside it can only be accessed with farm clothes; trucks (both sows or piglets and feed trucks) never enter, all have access from outside the fence.

What challenges might arise for the future?
Continue doing our best, optimising facilities with the use of new products that help us improve animal welfare and/or improve the economic performance of the farm. As for a farm expansion, we do not rule it out in the future.