Zinc oxide limitation in swine feed, enforced by the European Commission from 2022, causes uncertainty in the sector on how to handle the issues of animal adaptation and the appearance of diarrhoea, with the subsequent mortality rise. These issues ordinarily derive from feed changes among piglets during the process of adaptation to solid feed and whose regularity was until now was minimised with this supplement.

Faced with this challenge, Rotecna has designed the Evofeed multiphase feed control system, which eases the steady transition from one feed to another by blending them, therefore improving adaptation and reducing digestive complications.

At weaning, piglets have to readjust to solid feed, and their nutritional requirements may differ due to their weight increase. Therefore they are fed with up to 4 different types of feed, of varying composition. To provide a correct transition between each one of them enhances the animals' adaptation, assures an optimal growth and reduces the possibility of diarrhoeas appearing; it also minimises losses by low yield and an increase of the fatality percentage.

EVOFEED. HOW DOES IT WORKS?

The Evofeed multiphase feed control system handles the pace of the feed delivery system motors from the silo of each feed to the system that dispenses them in the room. This allows managing the volume itself of the feed that is allocated from each feed to the animals and, in the flow from one type of feed to another, generate mixtures that progressively lessen the ratio of feed to be removed and increase the percentage of feed to be introduced. Besides, it makes it possible to regulate the quantity of each feed dispensed by each room's system, thereby obtaining a more significant control over the animals' utilisation and evolution.

The computerisation of the weaning feed signifies essential savings in time and labour, as it avoids the farmer having to go through the corrals daily and mix the feed manually.

There is a touch screen with a straightforward and intuitive operating system to configure, regulate and monitor the feed, where the farmer activates the room in which the piglets enter, specifying the number of animals and their age. One can also configure which days the shifts in the type of feed should take place. The system then stores all this data to speed up future entries. Additionally, the touch screen also allows one to examine the speed of the motors, the programmed feeding curves in each room and to control piglet decease. And lastly, there are also functions to modify some basic parameters like the increase/reduction of the quantity of feed to be dispensed per room corresponding to the animals' development. 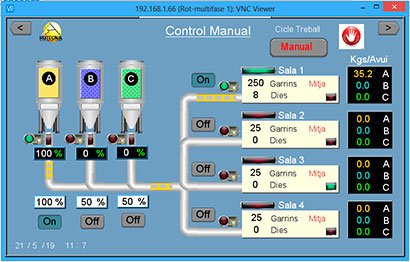