Export and efficiency, keys to the danish pig sector

Thanks to the significant increase in the farm size and the trend towards more technified production, Denmark has emerged as the leading European producer and piglet exporter, and one of the countries with the highest pig count: in this country, the swine population far exceeds the human population (12.3 million pigs compared to 5.8 million people in 2017).

Structure of the sector

As in many European countries, the Danish pig industry has undergone an extensive transformation from small family farms to large professional farms. Increased mechanisation and specialisation has helped them become better established, and the number of animals in them has only increased. All of this has enabled Danish farmers to improve their cost efficiency, which is essential to keep their results competitive.

On the other hand, the farms’ structure has also undergone considerable changes in the last three decades. Most of them used to function as integrated production units, in which pigs were raised in the same unit from birth to slaughter. Current farms, on the other hand, have more specialised structures. Only a third function as integrated farms and the rest is divided according to production phases.

This evolution is the result of strict environmental legislation that regulates the allocation of animals per hectare, and the need for farmers to specialise in the production of sows weaned piglets or growing pigs to increase efficiency.

Production and export of piglets

For more than 100 years, pig and pig meat production has been an essential source of income for the Danish economy. Approximately 90% of production is exported to more than 120 markets around the world. Given its high export quota, the industry depends on access to a large number of markets in the world.

Denmark currently produces some 32 million piglets a year, 13.5 million of which are sold alive to the European Union for further fattening, with Germany and Poland being the main destinations, and the rest are slaughtered in the country. This represents almost double the number of piglets that Canada sells to the United States annually.

The export of growing pigs started in 2004, and the demand for Danish weaned piglets has increased each year, which has limited national production levels. However, it appears that increased piglet production has had growth in both the domestic and live export markets. 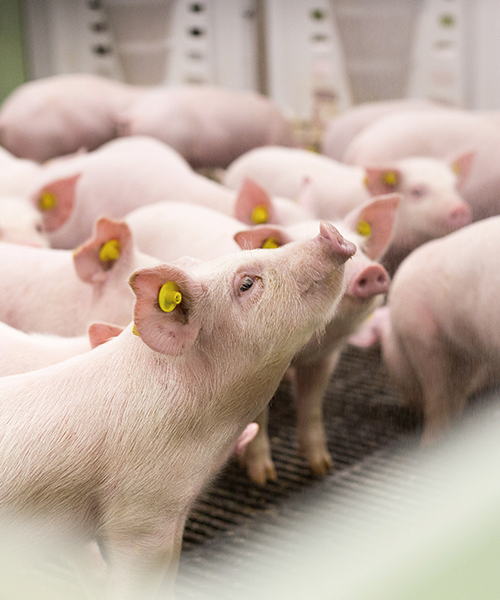 The most widely used genetic lines in pig production in Denmark are Landrace, Yorkshire and Duroc, the first two being the most used in the sow lines (achieving up to 35 piglets), due to their excellent maternal behaviour, and the last in the male lines for its performance in meat production and its food efficiency.

Due to the high production costs compared to other European producers, Danish pig farmers are forced to limit these costs as much as possible, which has encouraged the development of new technologies. Therefore, to survive in the European market, Danish pig producers have to continually improve efficiency through management, the application of new technologies and adaptation to new types of specialised production.

Measures before the ASF

Faced with the ASF threat in Europe, the Danish Ministry of Environment installed in 2019 almost 70 kilometres of fences along the border between Denmark and Germany. In addition, the Danish authorities have increased wild boar hunting, have decided to impose more significant fines in the case of not adequately cleaning or disinfecting animal transport vehicles, and have placed information signs in the rest areas on all highways, warning of the obligation not to leave food remains in the natural environment, all to prevent the entry of ASF.

It is very likely that, in the future, the Danish pig sector will be organised in large production sites, with a high degree of technological implementation, both in terms of management and minimisation of environmental impact. This need for technologies that help reduce odour and ammonia emissions will be a specific business niche in Denmark.

On this issue, new legislation is underway that will focus on the animal production regulation based on the amount of ammonia that is emitted and not on the number of animals housed in a facility, which is the method currently used. This law is expected to stimulate the environmental technology business area further.