The Dositronic G for gestation sows housed in gropus allows feeding individually of each animal in a controlled manner according to their needs improving the body condition upon arrival to farrowing and significantly reducing wasted feed.

The sows can enter any free situation In the pen, without competition with the other animals of the group, once inside, a transmitting tag the fixed in the ear is detected by the antenna of the station, then the electronic dispenser feeds the sow with the volume of feed that corresponds to her day of gestation in the curve that has been assigned to that animal, according to its parity and body condition.

The sows eat isolated from the others and the feed is gradually dispensed as they are ingesting, so they eat the exact amount that  corresponds to them avoiding waste of feed. Once the ration of the day is administered, the dispenser stops, and the sows leave the station, living it free for the next sow.

The stations are adaptable to any pen design and group size. It is possible installing one or more stations per pen, with 15 to 20 animals per station. The adaptation of the gilts to the system is intuitive and very fast, since they see their companions eat inside the box, which is very similar to the stall they have been using since insemination until they are moved to the gestation pens. The stations have a bar that prevents the sows from laying inside.

ADVANTAGES
Accurate and individual control ot the dispensed feed.
Feeding without competition betweeen the sows of the same group.
Automatic application of increases in consumption as the animal gestation progresses.
Better condition of the sows when they reach maternity.
Significant reduction of feed waste.
Several feed points per pen facilitates learning to use the system by imitation, reduce competition for entry to the station and ensure the controlled feeding of animals even in the event of breakdown of any of the stations of the same pen.
Automatic addition of the sows to the system when a transponder is detected  for the first time.
Daily reports of consumption behavior  with alarms for sows  with feeding problems.
Very versatile gestation pen desing, facilitating the adaptation of the electronic feeding system to both newand existing farms. 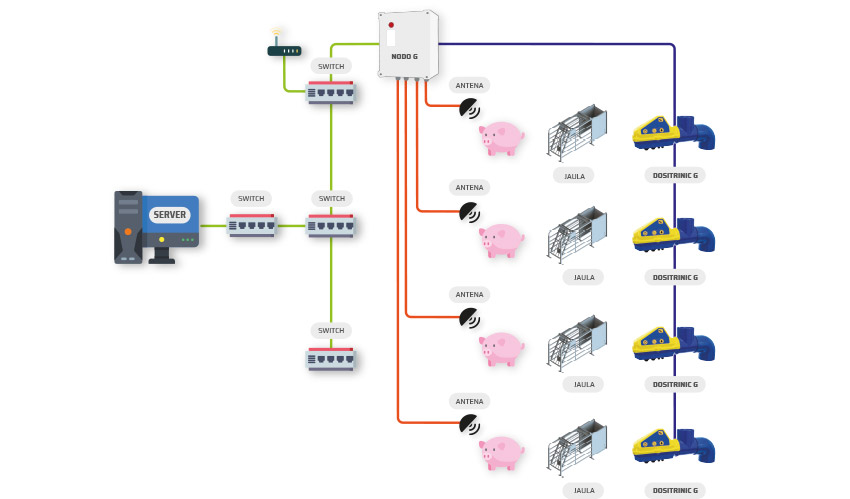