J. L. Lasierra: "The Feeding Ball offers many advantages at the productive level"

Evolution and growth have marked the trajectory of the Hermanos Lasierra Callén SL livestock company from Candasnos (Huesca). What started in 1974 as a small fattening farm with capacity for 150 animals, a few years later became a sows' farm, first of 300 sows and then 600. Currently, the company houses 2000 sows, but their facilities have become obsolete, which is why Hermanos Lasierra have chosen to build a new farm aimed mainly at animal welfare and increased production, according to José Luís Lasierra.

Last June, for the first time, animals entered the new facilities, which consist of various areas. Sows coming from quarantine, which is located on the old farm, arrive at a learning area, where they must become familiar with the feeding machines before moving on to the next area, the covering area, where they will be mated by a male. Using a cart to transport the male makes it easier for ranchers, who no longer need to use dividers in the hallway to carry the animal in front of the sows. The trolley adapts to all the corridors of the room and can be controlled with a remote control to carry it in front of the sow, which means a significant saving of time and personnel. 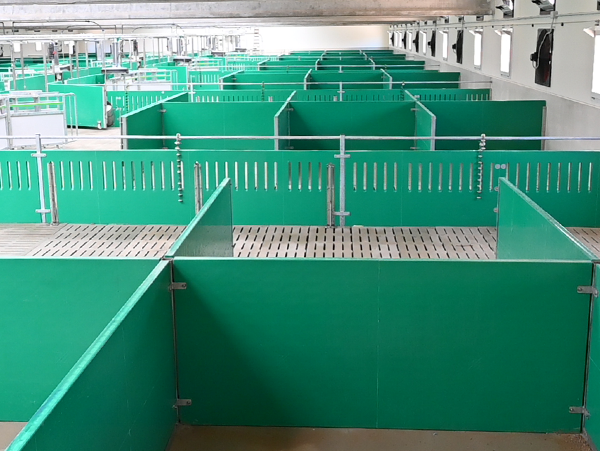 After the covering area, the farm has a room for confirmed pregnancy and a maternity area. In total there are 17 maternity wards with 24 seats each. Before reaching the maternity area, the sows must go through a laundry and disinfection room with showers at the top.

Finally, there are weaning rooms, where the piglets are transferred when they are 21 days old. In this space, they remain up to a maximum of three days before being sent to another farm, although the rooms have enough feeders, freshwater taps and a ventilation system that, if necessary, would allow the animals to stay there until three weeks.

Already in the outside of the farm, the slurry raft is equipped with the Tecnapur mixer, which removes the solids that remain at the bottom of the raft so that they come out afloat, making it easier to extract nutrients from the slurry.

One of the bets for the new maternity wards has been the Feeding Ball installation, the feeding dispenser ad libitum for sows in motherhood. "We have anticipated that the installation of the Feeding Ball is a good option for sows to eat when they feel like it, without having to force them to do so. In this way, the farmer does not always have to be aware of what the sow eats”, explains José Luís Lasierra, adding: "It is a product that offers many advantages at the productive level, with which you don’t have to constantly lift the sow, which avoids many crushes, and with which we hope to considerably reduce the animals’ stress levels”. 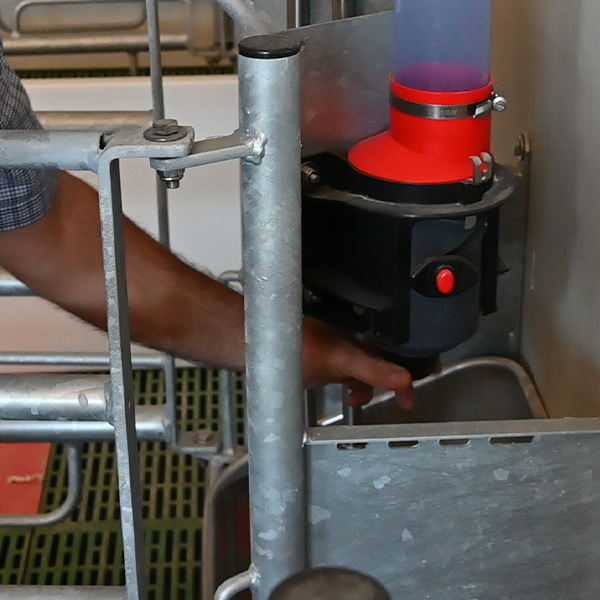 The farm works with the Feeding Ball. Photo: Rotecna.

The Feeding Ball is complemented by a water distribution system since, as Lasierra explains, "the sows need a lot of water while breastfeeding the piglets, about 60 litres a day. That is why we have adapted a system with a sufficient flow so that the sows have water at their disposal throughout the day. In this way, sows produce more milk and piglets grow faster”. Besides, the rancher has also installed the Easy Drinker Midi, a tap for piglets that allows animals to always have running water, which does not stagnate in drinking fountains or become contaminated.

The new farm also has Rotecna electric heated plates, a product with which he had already worked on the old farm and which have produced very good results. "The plates are individual and thus they are better regulated and are very economical”, Lasierra says. The farmer assures that, with this product, he hopes to obtain a greater animal production and improve their comfort.

In addition to these products, Lasierra has also opted for Rotecna PP panels, of which their easy cleaning and handling, dispensers in the coverage area, slats and TR5 hoppers for weaning rooms, etc. stand out. "Working with Rotecna is working with a quality product, the best on the market. Our relationship with the company began many years ago and the experience has been positive”, he says.

Regarding the sanitary status of the farm, Lasierra points out that they have taken all the measures that are in their hands and all those that the administration marks, both internal and external (training employees in sanitary matters, showering at the entrance and exit of the farm, carriers’ access control, employees and all personnel related to the farm, hole sealant to prevent the entry of rodents, etc. For now, he is not concerned about the disease threat or pathologies, although he affirms that to maintain good health status, it is essential to comply with all the measures that they have implemented.

The new farm has come into operation just a few months ago, but it has done so with the clear objective of improving production. In this sense, Lasierra concludes that "we would like to reach 38 animals per sow and year, and from here continue to improve”.