The increase in prolificacy registered in recent years due to the introduction of "hyper prolific" sows (more and more farms with a production of more than 30 piglets/sow/year) generates a level of uncertainty that requires a constant adjustment of management conditions and feeding, to achieve a harmonious balance of production and productivity. To achieve maximum milk production, there are two fundamental aspects related to sow nutrition: 1) maximise feed intake, and 2) avoid excessive mobilisation of reserves to optimise the sow's productive longevity.

Milk production depends on the sow's genetics, but it is also related to the capacity of stimulation and demand of the litter, which depends on the vitality and piglet viability. Although sow's milk production has increased in the last decade, the piglet weight at weaning has not increased at the same rate because of the greater prolificacy and a decrease in the amount of milk ingested per piglet.

Corresponding with the start of milk production after colostrum, sows undergo many hormonal changes in their ovaries and uterus, preparing them for the next gestation. It is proven that excessive mobilisation of body reserves above 10-12% of body weight can disturb these processes, affecting fertility and increasing the weaning-coverage interval. Furthermore, excess mobilisation also compromises the sow's longevity, and often forces early deviations, due to reproductive failure, drop in production or problems derived from excess mobilisation. However, a certain degree of reserve mobilisation increases milk production and does not harm the overall efficiency of the process.

In this context, feeding management and decision-making on how to feed the sow during this period (especially when it comes to high production sows) have an impact that goes beyond lactation itself and can compromise the overall yield of the entire farm (prolificacy, quality of piglets at weaning and productive longevity). In recent years, with the arrival and implementation of feeding system types like Feeding Ball, that allow the sow to consume the feed voluntarily throughout the day (compared to what had been the usual with regular administration systems in two or three feedings per day), the question raised has been to what extent the sow might be able to self-regulate their intake to maximise production and control loss of reserves. The farmer's questions are: Does feeding "at-will" lead to greater feed consumption during lactation? Would a higher feed consumption allow an increase in sow production and, especially, litter quality? What happens to body reserves?

To try to answer some of these questions, a contrast was made in real field conditions with high production sows (Landrace x Yorkshire;> 30 piglets/sow/year) to evaluate the effect of implementing two feeding procedures during lactation (standard controlled regimen, PCE with two daily administrations vs ad libitum with Feeding Ball) in a 1500 sow facility. Lactation was controlled for 153 sows classified as young (<= 2 cycles; n = 70) and adults (> 2 cycles; n = 83), distributed randomly in the two groups, based on the feeding management, with a 2 x 2 factorial design. From weaning to conception, they were fed 2.6-3.0 kg/day of gestation feed. In the period close to coverage, 1.8 to 2.0 kg/day was given. From the coverage until the confirmed gestation at 35 days, they were given from 2.9 to 3.1 kg/day. From the confirmed gestation to the entrance to farrowing pens (110 days of gestation) they were fed 2.6 to 3.0 kg/day. Until delivery, the same amount of lactation feed was given daily.

Following farm management, the sows were weighed, and the dorsal fat (EGD) thickness was recorded individually by an ultrasound scanner at the entrance to the farrowing rooms and weaning. The productive yields were registered (piglets per litter, after the adoptions and on day 20, with the real average duration of lactation being 24.1 days, with a weaning schedule of two days per week, Thursday, and Monday). The individual intake of the sow was recorded daily to appreciate the difference between supply and rejection between the farrowing date and the 20th day postpartum. The intake parameters were standardised to the exact date (day 20 of lactation) to not interfere in the usual farm management processes.

Table 1. Effect of the feeding program on the accumulated consumption and average daily consumption during lactation in high production sows

1Accumulated consumption in kg during lactation (0-20 days). 2Sow's PV at the entrance to the farrowing room not corrected by the pregnant uterus.
¥Values less than 0.05 show significant differences between groups.

After performing the calculations and statistical analysis, taking into account the feeding regimen (standard controlled regimen vs ad libitum) and the age category of the sows (young vs adult), higher feed intake was observed during lactation for sows with an ad libitum management compared to those fed under a PCE (113.3 vs 100.6 kg/sow; p <0.05; Table 1). Figure 1 shows that this increase is due to higher consumption during the first ten days postpartum, which results in higher accumulated consumption. Another striking aspect of the intake is that, although average adult sows consume more than young sows (116.7 vs 97.3 kg/sow; p <0.05; Table 1), an interaction is observed during the first phase of lactation that suggests a higher consumption of young sows ad libitum compared to adult PCE, which is compensated in the overall lactation (Figure 2). In any case, as can be seen in Figure 1, it is necessary to highlight a more significant individual variability in the voluntary intake of sows fed ad libitum.

Figure 1. The daily evolution of the sow's accumulated consumption according to the feeding pattern (PCE vs ad libitum) and age (Young vs Adult) 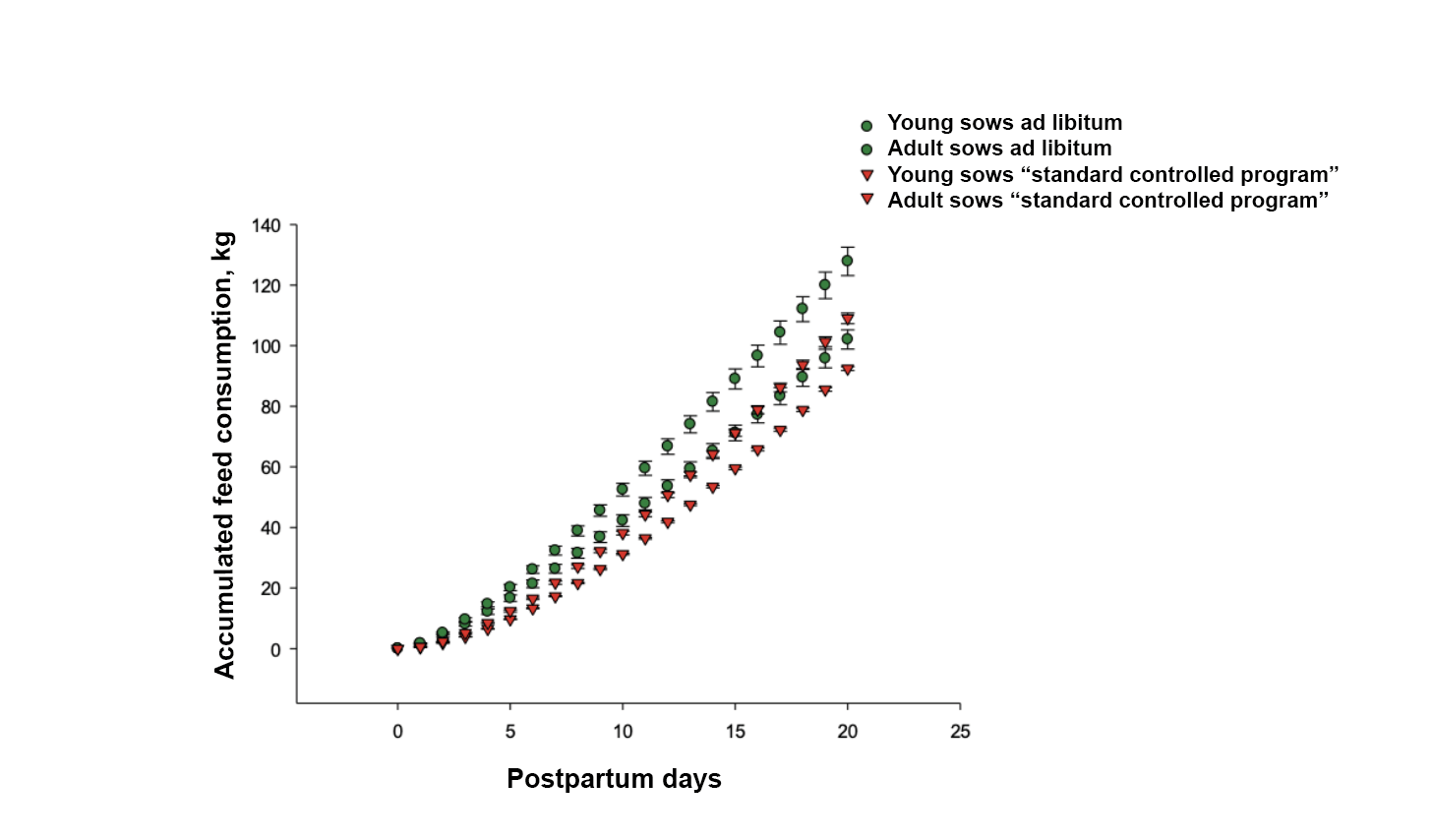 Figure 2. Accumulated consumption of the sow depending on the feeding pattern (PCE vs ad libitum) and age (Young vs Adult) the first ten days postpartum. 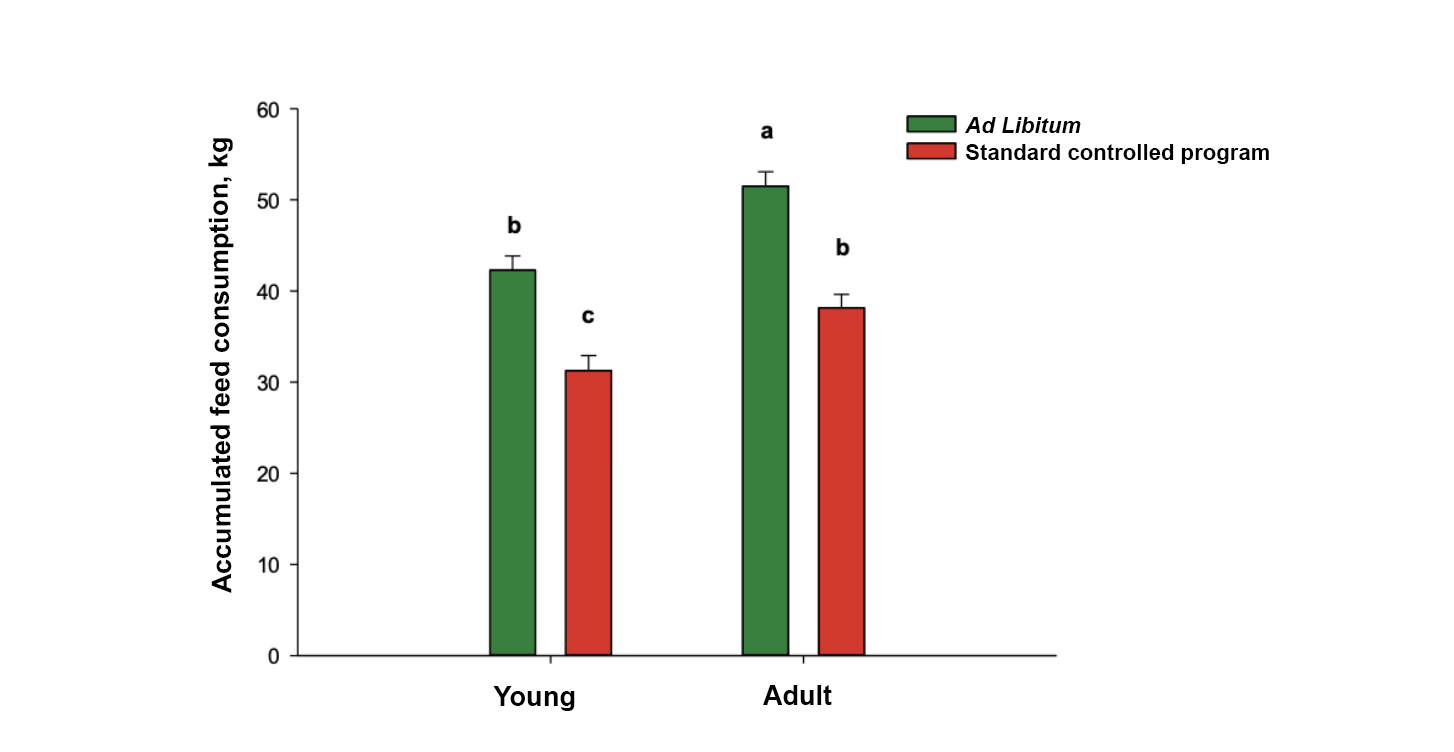 Both experimental groups arrived at calving with a similar reserve status in terms of weight, EGD and loin depth (Table 1). More significant mobilisation of reserves is observed for sows fed with PCE compared to those fed ad libitum. Especially noteworthy is the weight loss (p = 0.029), the feeding hardly affects weight loss in young sows, but adult sows lose much less weight with the ad libitum plan (Figure 3). EGD and loin depth follow a similar trend without statistical significance (p> 0.05).

Figure 4. Interaction between feeding program (PCE vs ad libitum) and age (Young vs Adult) on the number of piglets at day 20 of lactation. 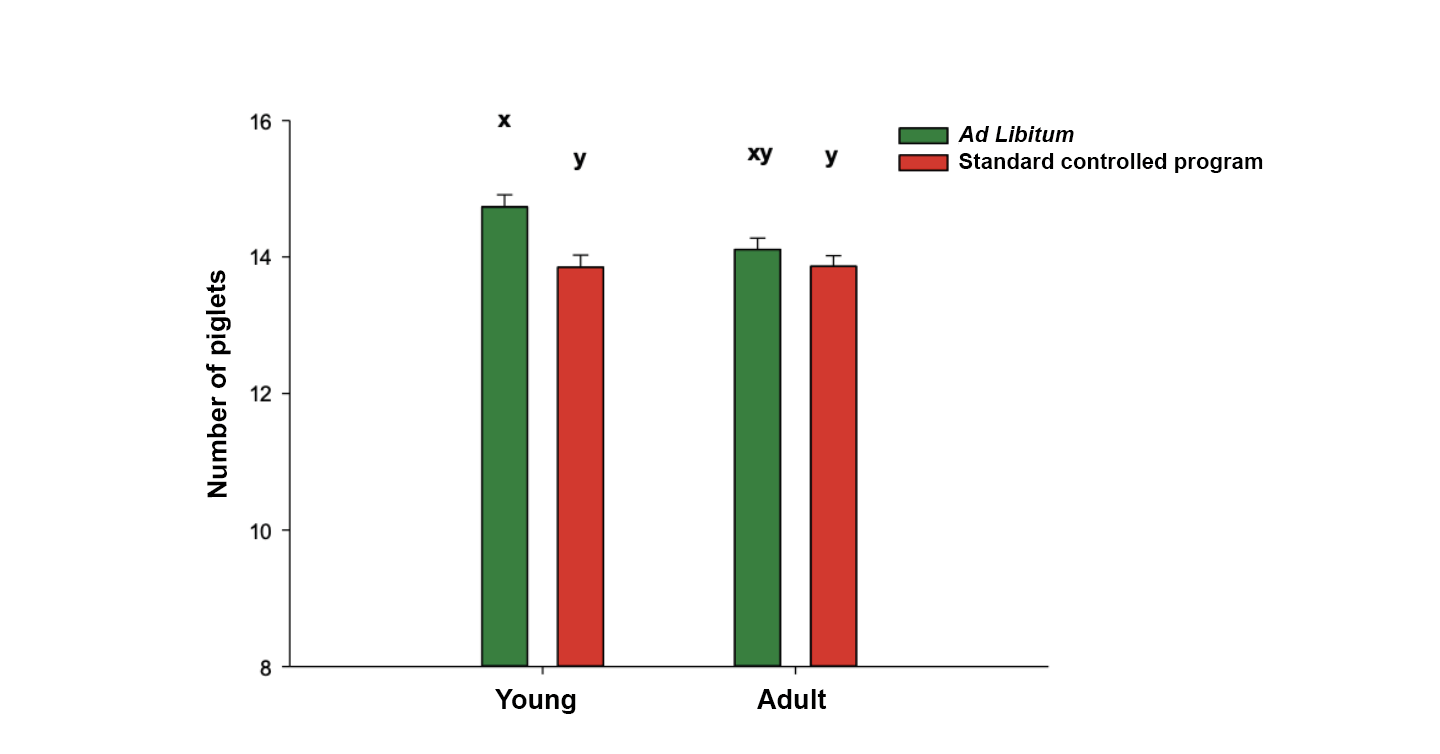 The results show that feeding high production sows ad libitum throughout lactation, using the Feeding Ball system, allows maximisation of individual, voluntary consumption, helps to control the mobilisation of reserves, and keeps a high productive level (weaned piglets). However, there is no reliable data on litter weight or variability in individual piglet weaning weight. On the other hand, the more considerable variability in the consumption response observed in the ad libitum system can be a long-term problem for those animals with difficulties in regulating their intake and who would be prime candidates to be checked with some type of regulation. Finally, the ad libitum feeding pattern does not exempt the sow from daily supervision and control to avoid problems or feed waste.