Ramon Farré: "With the Dositronic M sows produce more milk and piglets grow an average of half a kilo more."

Linked to pork production since the beginning, Ramon Farré works with 500 sows in the small town of Vilves (Lleida). To improve the productivity of his animals in 2018, he tested the Dositronic M, Rotecna's electronic feeding system. The installation of 156 Dositronics has allowed him, during this period, to optimise working time, achieve higher weight piglets at weaning, and detect problems with the sows during lactation.

What is the origin of the farm?

Specifically, we built this farm in 1984, although we have always been dedicated to the production of animals. We used to have another small farm with 30 sows, which grew to 90. As we could not house any more animals, we built the current facility, which at first had 100 sows and a fattening house. It was a closed cycle which, then in 2001, we transformed into a sow farm with 500 sows.

How has the farm evolved?

When we removed the fattening house, we installed new farrowing and weaning area but, when we moved to three-week bands, we still had to create more farrowing places, which forced us to move the weaning. Because of space limitations on the farm, we could not expand, so we opted for building new farms in the same town and in other nearby locations, such as Preixens and Ponts, where we took the weaning. Altogether, we have 3,500 sows.

How is it distributed?

We have three buildings: one for covering and control, another for confirmed gestation and in the last one we have the farrowing area, where we previously had the weaning. We use this same distribution in the other three farms, although in the largest one we have more buildings for confirmed gestation and we put the weaning area within the same farm.

Who works on the farm, and how are the tasks distributed?

Two people work on this farm. We have an operator in charge of the animals all day long, and another employee is in charge of the weaning place that we have about 2 kilometres away and performs support tasks. As we go with three-week bands, we distribute the tasks according to the workload, which is usually variable. 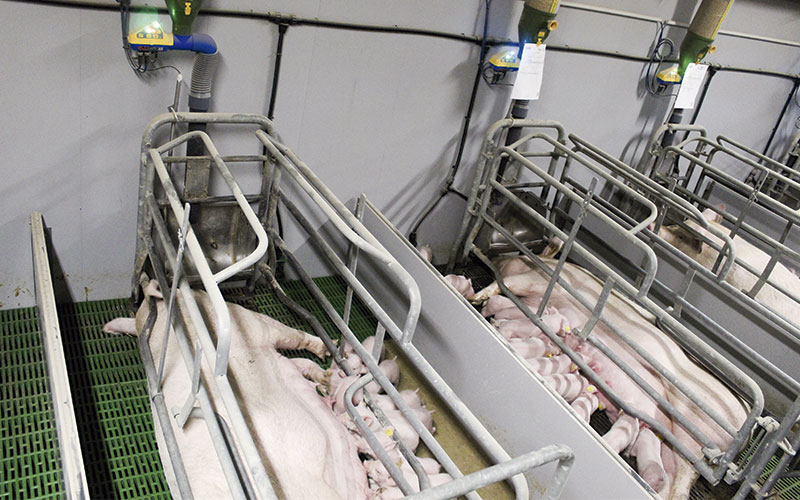 Why did you choose to work with the Dositronic M electronic supply system?

In 2018 we installed 40 Dositronic devices on a farm and tested them throughout the year. We got very satisfactory results, especially in the summer. During summer months, differences between the sows that farrowed in the rooms with the Dositronic M and those that did not were abysmal. The piglets that had been in the farrowing houses with Doistronic M grew more, and the sows showed no problems going into heat. This was a big surprise for us.

What are the main benefits you would highlight from its use?

Firstly, time optimisation for the farmer. Operators working in farrowing pens do not waste time feeding or cleaning feeders because no feed is lost. Secondly, with the Dositronic M sows are much calmer, they produce more milk, and the piglets grow an average of half a kilo more. Besides, we have noticed an increase in the number of piglets born; I suppose because sows in farrowing houses are eating much more and because ovulation and output are also better.

How many feeding curves do you work with?

We work with two curves, one for the youngest sows and another for the multiparous ones. Both curves are very similar, the only difference between them is that the feed increase after farrowing is not as fast in the first one, and it finally leaves us with half a kilo less when we reach the maximum. We feed them six times a day; 40% of their food is served in the first two takes and in each of the other takes we give them 15%.

Do you think the button panel is an advantage?

It's something that comes in handy. I would emphasise how convenient it is to leave the curve programmed and have it applied, by merely pressing a button when the sow has farrowed. On the computer, it is only necessary to program the curve on the day the sows enter the farrowing house. This panel is also instrumental in increasing by 10% the feeding curve of the animals that are nervous because they are still hungry. If we see that some sows have not finished their ration, the panel also allows us to reduce their curve.

What does it mean to have all the consumption data computerised?

It is very convenient because on the computer we can see the sows' behaviour: see how much they eat, if they eat more if any of them stop eating, etc. Having the data of each sow before doing the farrowing control gives us much advantage and allows us to act faster if any of them has any problem. In short, the data will enable us to detect any problem well in advance, such as an infection, mastitis, or why the sow stops eating.

Have you noticed any improvements in sow and litter productivity?

In a nutshell, we've got bigger weaned piglets. The weight issue at weaning has always been a handicap, and with the Dositronic, we have increased this weight and reduce handling problems and mortality in the transition. Anything that means gaining grams during lactation is an excellent advantage for the day when you separate them from the mother. 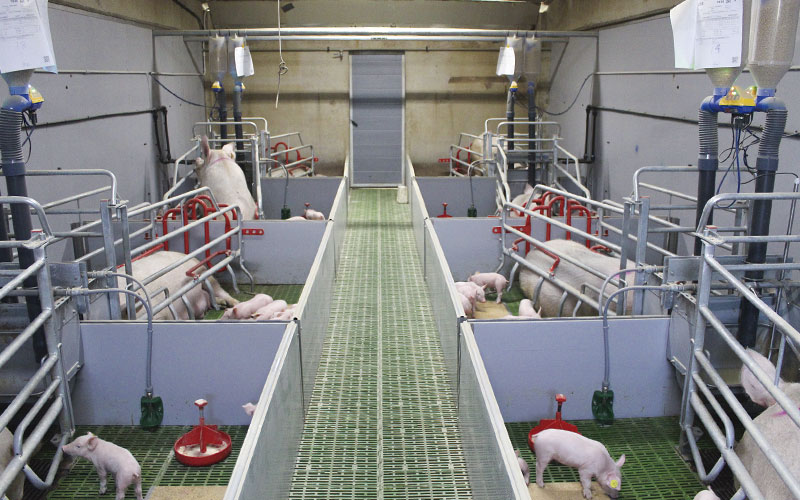 What other Rotecna products do you have installed?

We use many of the products that Rotecna manufactures: dispensers, feeding systems, farrowing floors, nests, hoppers, panels, etc. I would like to highlight the Clutch above all. This dispenser is the one we use the most because it offers us many advantages. But what I would underline most is its ease of use, because it can be disengaged and medication can be introduced instead if needed.

What do you value about Rotecna?

It's a great advantage for us to have Rotecna so close. It is a company that offers solutions to all the needs we may have and offers outstanding quality products.

What are your main health concerns?

Our primary concern is African swine fever (ASF). That is why we are trying to take extreme measures in terms of biosecurity, access, or preventing other animals from entering the farm enclosure.

What other measures do they take to reduce the risk of disease transmission?

We disinfect all vehicles and do not allow entry to third party transport, as we have our trucks to move the animals from one farm to another. We strictly follow the protocol that must be complied with by the personnel working on the farm, and the workers must shower both at the entrance and exit of the farm and only enter with disinfected clothes.

What are the challenges for the future?

For the past two years, our main aim has been to be as efficient as possible and to reduce costs. This is one reason we have invested in the installation of the Dositronic M. Taking advantage of the fact that the pig sector is in the right moment, we want to continue investing in optimising as much as possible and in reducing production costs even further.

Finally, what is your vision for the future of the sector?

I'm very optimistic. At the state level, we are working very well, farmers are becoming more professional, and farms are becoming more technical, which has allowed us to be more competitive and efficient. We have the ASF threat, which if it comes, could change things a lot, but if we keep this disease away, I think Spanish pigs have a great future. In the environmental field, slurry management is becoming more complicated, and we will soon have more and more pressure from the administration. This is, therefore, something we must also work on, and this is a good time to invest and get ready to meet the standards set by the law.