A. Luengo: "With the Dositronic we want to have the maximum control over the sow's nutrition."

The new facilities are designed to contain 3,300 sows. The farm consists of two twin gestation sections, each with its control and confirmed gestation areas with a capacity for 2,560 covered sows, and a maternity ward with 768 farrowing places distributed in 24 rooms.

Also, the control area has enough places to ensure the sows, as well as any replacement that may be added, get in heat after weaning.

Finally, a shed adds to the farm and receives the replacement, another one to house the sows and some offices that work as a reception area for staff and other services.

Besides, there is a second phase to be completed. This is an external transition area with a capacity for 12,000 piglets, which is in the same location, but several kilometres from the sow farm. This facility has 18 rooms with 32 pens each. 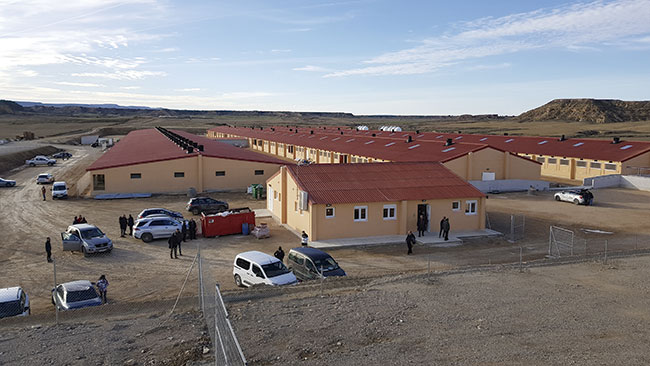 Exterior view of the farm located in Albalatillo.

To guarantee the productivity and efficiency of the farm, the property has opted to work with automated feeding, both in transition and in maternity. The technical veterinary director of the Caspe Cooperative, Ángel Luengo, explains that they have opted for this type of feeding as a business strategy, given that "in any investment we make in facilities, we seek a balance between its cost and the expected return, and we are convinced of the direct relationship that exists between the most individualised feeding possible in these phases and the correct development of the animals".

The new farm has opted for installing Dositronic, Rotecna's electronic feeding system. For this reason, this product has been installed in the farm's 768 maternity places. In the words of Luengo, "we place great importance on the correct feeding of the animals in each phase, and even more so in a phase such as lactation, which is so important in the sows’ productive life and the piglets themselves. We believe that the Dositronic system will help us to have maximum control possible over the sows' nutrition simply and at a reasonable cost".

In the daily work at the farm, individual feeding curves are applied for each animal and automated. "The aim is to know instantly, visually, and through records, how each sow is being fed, with which we hope to optimise consumption to increase milk production and piglet weight, and also to impact the improvement of other production indices," says Luengo.

The first animals entered at the end of December, so after the first coverings, the first births are expected by the beginning of May. "With these expectations, the first pigs will be sent to the slaughterhouse in about November, and the results of the new farm and the Dositronic system will be seen, especially starting in 2021. We have set ourselves the target of 100,000 piglets weaned per year in this first phase," he adds.

There are also other products from Rotecna installed on the farm: hoppers, separators, slats, the feed distribution system, etc. "Rotecna's long history means that it is always present when we study a budget proposal. We have seen that over the years, they have been providing solutions to the livestock sector and have been adapting their products to reality. On the other hand, we have cherished their innovative initiative in new products that fit in with our apprehensions", says Luengo. 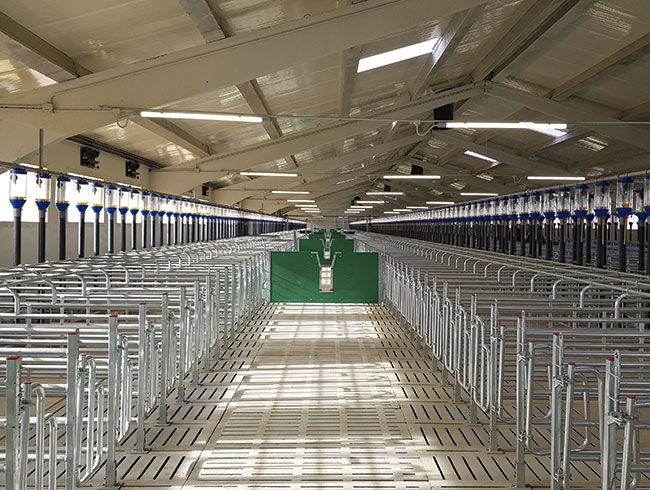 Gestation with Rotecna panels and dispensers.

As far as the farm's health status is concerned, the cooperative's technical veterinary director points out that the main health concerns are common to the rest of the sector: PRRS, ASF... as well as the fact that "we have to face up to the usual pathologies with fewer medical tools, due to antimicrobial resistance, and to tackle them with improved handling, facilities and a positive and courageous attitude".

To fight these threats, the farm has opted to apply all kinds of internal and external biosecurity measures, to train employees in health aspects, to control transporters’, assisting employees, and veterinarians’ actions. "The sector itself must become aware of how much is at stake, and avoid risky practices that could endanger the existence of a large number of farms due to the entry of diseases that would paralyse exports. We have to be much more demanding with the guarantees for the import of piglets, and that our farmers are a good example in terms of biosecurity and animal welfare practices", concludes Luengo.