ASF: And if it comes to Spain?

COVID-19 has focused all public attention in the past few weeks, leaving aside other important issues, such as the expansion of the African swine fever (ASF) in Europe and its possible effects. Currently, in the European Union, there are already twelve countries with ASF cases, many of which have seen exports blocked, with the consequent economic loss that this implies. According to professionals, extreme biosecurity measures and acting quickly in the face of the appearance of a focus are the main tools to combat this disease and prevent its spread.

In 2014 the presence of the virus was confirmed in wild boars and on white-capped pig farms in countries such as Lithuania, Latvia, Estonia and Poland. In 2016 the ASF charted its expansion in northeast Europe, and in 2017 the disease was detected in wild boars in the Czech Republic and domestic pigs in Romania.

In 2018 there was an increase of ASF cases in the areas already affected compared to the same period in previous years, and it emerged for the first time in wild boars in Hungary and Belgium, and in domestic pigs and wild boars in Bulgaria. In 2018 and the first months of 2019, the trend was the same as in previous years: at the end of summer 2019 (this is when the most significant increase in cases occurs) the presence of the disease was confirmed in Slovakia and Serbia, then in February 2020 it appeared in Greece.

Recently, Germany confirmed a first case of ASF in a wild boar, in the district of Spree-Neisse, near the border with Poland. 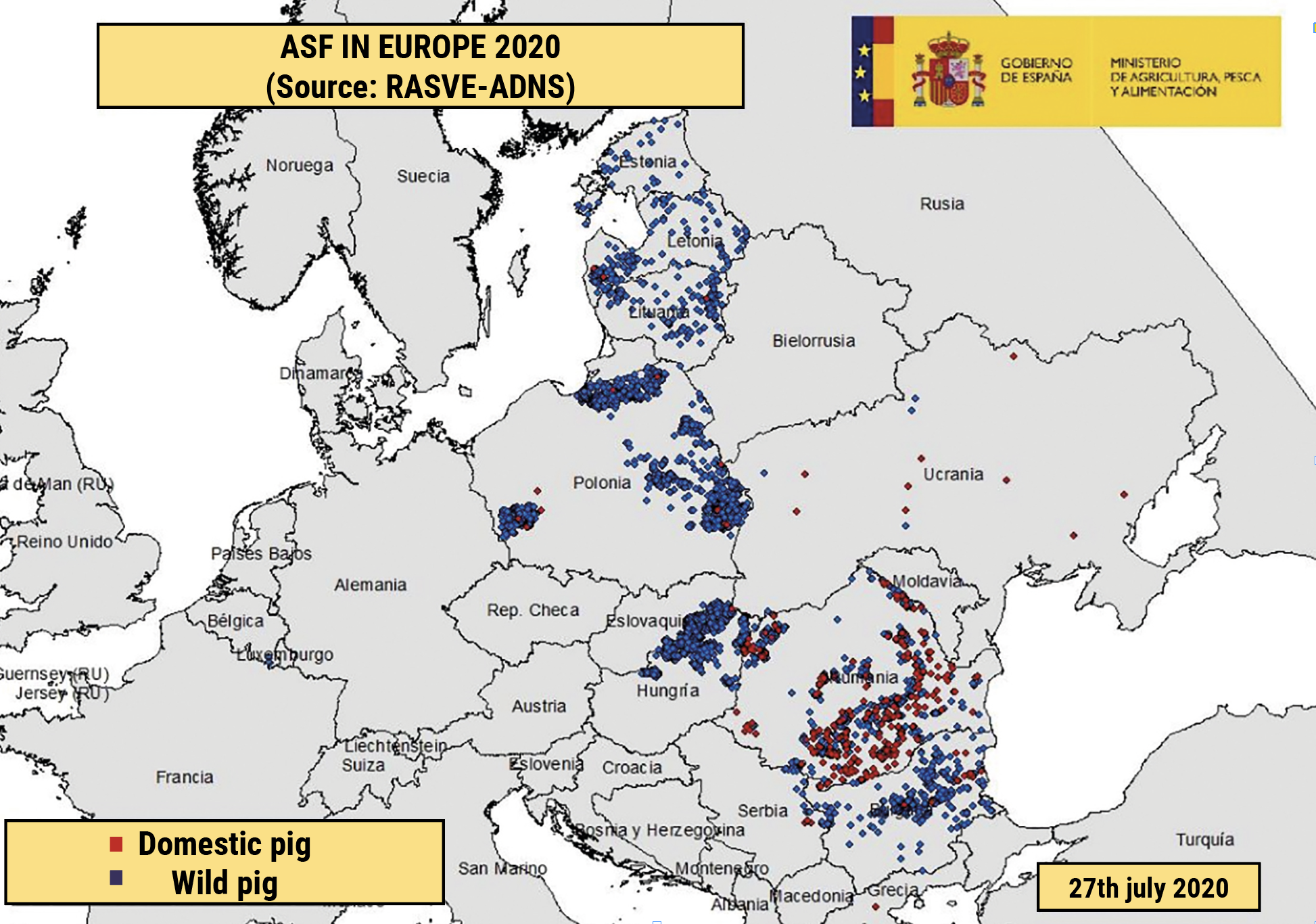 Even though the ASF is currently thousands of kilometres from our borders, experts agree that we must stay alert and maintain security measures. This is stated by Antonio Rouco, professor of animal production and quality coordinator at the University of Murcia, who warns of the damages that the African swine fever already caused in Spain between the 60s and 80s: "When the disease came to Spain, the country was an autarkic state that neither imported nor exported pork, and it was until 1986 when it became part of the European Union. Then the rest of the partner countries could sell their products but Spain, having the ASF, could not export. For this reason, the administration made a great effort to eradicate the disease and, finally, it did so in 1989. Thanks to intensive epidemiological surveillance, the country opened up for export. Since then, the export trend in Spain has continued to grow, thanks to the good work and the sector’s technification; in 1995 the country became a net exporter and, currently, Spain is one of the highest pig exporters, mainly because of its competitiveness.

What effects could ASF have now??

This highly contagious ailment can come up with and generate very serious economic losses and provoke very high mortality rates.

The arrival of ASF in Spain could jeopardize everything that has been achieved in recent years. As Rouco highlights: "The globalization of the disease would cause the Spanish pig industry to fall back to 1980 levels and to forget about exports.” In this sense, and as the professor maintains, “economic losses could reach hundreds of millions of euros. For example, if an outbreak affected an average of 30 farms, the losses in one year could be around approximately 70 million euros.” On the other hand, if around half of current production is destined for export (to the European, Chinese, etc. market), the virus could cause the drop of the pig herd to half, with the loss of the jobs that this would entail. In this situation, smaller slaughterhouses would close their doors, while larger slaughterhouses would be supplied with products from other unusual markets and could resort to Dutch or Danish markets.

For all these reasons, one has to be alert and not let your guard down. "Our surveillance network is one of the best; we have great preventive medicine and excellent biosecurity measures. If we do all this well, we should have no problem”, says Rouco.

Despite all the aforementioned, and that when there is an ASF outbreak in a country, importers stop buying pork there, when we theorise about the possible ASF arrival to a large exporter of pig meat such as Spain, it should be taken into account how the sudden lack of meat supply this would generate, would affect prices at the international level, and how the large importers would react, as such as not to not increase their costs, could continue importing from countries unaffected by ASF. Furthermore, it should be kept in mind that, if the affected country belongs to the European Union, in theory, intra-community trade would continue to be allowed, so hypothetically, an unaffected EU country could cover its domestic consumption with meat imported from an affected EU country, and export its national production without problems. However, let's hope we can avoidhaving to keep track of what could happen.

What can the sector do to stay away from the ASF?

The head of pork in “Union of Unions” and “Union of Pagesos”, Rossend Saltiveri points out that "the ASF consequences may be dire and, at this time, that risk cannot be accepted.” Saltiveri considers recovering the balance between the demand and the piglets supply essential to reducing risks: "In recent years many fattening farms have been built, so importing piglets is used to fill those places. With the ASF threat, it is highly inadvisable to import piglets. If done, it must be with the maximum guarantees and with the highest biosecurity and surveillance conditions. However, it is best to stimulate more mother farms to regain that balance”, he says.

On the other hand, due to the increase in the wild boar population, Saltiveri points out that it is essential to apply hunting regulations to this species specifically (when in a territory the threshold of eight wild boars per square kilometre is exceeded, this figure must be acted on and reduced). However, the pork administrator assures that "there are many territories in which it is not being done, those responsible for hunting reserves and administrations do not act, and it is essential to do so because if the ASF came through the wild boars it would be very difficult to control.”

Faced with this situation, Saltiveri is concerned about the arrival of an ASF outbreak in the current scenario, in which COVID-19 is the highest government priority. “If an outbreak were detected, the procedure to be followed would be to immobilise and slaughter the animals in the proportion of the affected area. In return, it would be possible to receive financial compensation that can now be jeopardized, making it more important than ever to extreme biosecurity measures, don't let your guard down and always act as quickly as possible” says.

What are the main biosecurity measures?

The ASF can reach a farm through different routes, as Pilar Fernández points out, Production and Research Director of the Kerbest Group: by infected wild boars that maybe around our farms, by transporting live animals (Spain imports many piglets, and these should be checked at their place of origin before transporting them and upon arrival at their destination), by hunting animals in other countries (therefore, border controls should be intensified) and through the raw food trafficking from pigs or wild boars for domestic consumption by people travelling to areas with ASF (these foods could be introduced to farms to eat them or dump the waste on pigs they have at home in a domestic pen).

Knowing this, it is essential to implement basic security measures. Fernández explains that "the most important thing is having a perimeter fence (with an approximate height of two meters and anchored to the ground safely) that prevents the entry of any type of animal on the farm, both wild and domestic, and check it every week; a good spot away from areas with high densities and more diseases; a ford and disinfection arc that are used correctly the delimitation of a dirty area and a clean area inside our farm to avoid any type of crossing (with an internal fence that surrounds the warehouses that separate the clean area from the dirty area and without the possibility of crossing from one area to another); the differentiation of paths, one exclusively for the internal farm personnel and another for the removal, quarantine and corpse collection. Another measure he mentions is the prohibition of the entry to the farm of food made with pork, since "it must be taken into account that many of the operators may originate from countries with ASF and that it is very typical to bring pork sausage when they return from spending a vacation there, and the pork they introduce on a farm may be contaminated”.

The perimeter fencing is a fundamental biosecurity measure to prevent the entry of diseases. Photo: Rotecna.

On the other hand, cleaning and disinfection tasks considered second category type tasks, despite being one of the fundamental pieces in the fight against pathogens, are one of the fundamental tools in internal biosecurity. As Fernández assures us, "thanks to them we will be able to reduce the use of antibiotics and treatments. In this sense, the production expert and pig research advises doing an "all inside, everything outside” type approach. “All the mobile material that exists must be removed so that it can be washed, dried and disinfected elsewhere. All the organic matter should be removed and the surfaces should be soaked with the help of detergents or foams that are better cleaners, to then wash with hot pressurised water, starting with the ceilings and from the inside of the room to the outside of the door, "he explains, and adds: "The pits should also be cleaned, checked and subsequently dried and disinfected. At this point, it is important to remember that you should rotate the disinfectants.”

Finally, developing a biosecurity plan is a key aspect of the fight against the ASF. To do so, it is essential to know the epidemiology of diseases (their duration, how they can affect animals, infection routes, etc.) prepare a flowchart of all the possible entrances that the farm needs, develop working standard protocols (PNTs) that are applicable in such situations, establish the measures to be adopted and assign a biosecurity manager with the mission of transferring all knowledge to farm employees and constantly monitor that established procedures are working properly.

All the aforementioned measures reduce the risk of ASF entry but never eliminate it since risk 0 does not exist. "We can improve our systems, but there will be a factor "R"(risk) that will never be 0, since, from the moment we decide to build a farm with the best possible location, with the best biosecurity measures and with the continuous training of our employees, we took animals to a place where there were none, being able to act as pathogen hosts, "concludes Fernández.