Emilio Magallón: "Never before has pork had as many sanitary guarantees"

We talk to Emilio Magallón. The vet takes a look at the current situation of the pig farming sector and deals with topics of interest such as ASF, the use of antibiotics and slurry management.

In economic terms, 2019 has been a very good year, as Spanish pork exports have grown, mainly due to the spreading of African Swing Fever (ASF) in China. The shortage of pork in this country has revolutionised world markets. On the other hand, the establishment in Binéfar of the largest pig abattoir in Europe has led to the fall in the price of pork that usually occurs at the end of the year being less pronounced than in previous years. From the production standpoint, this year the sector has had to face pathological problems such as the increase in porcine reproductive and respiratory syndrome (PRRS) outbreaks.

This year, apart from focusing on growing, farmers have had to concentrate on establishing strict biosecurity measures, since the key to the continuity of a pig farming sector such as the Spanish one, which depends more than 50 % on exports, is to step up biosecurity measures.

As a general rule, biosecurity levels on sow farms are already high, but they must be reinforced. Nonetheless, there is still much to be done in relation to feedlots and stricter measures must be established. On the other hand, care must also be taken with livestock imports. Although there may be financial opportunities, such as offers of less expensive piglets, all imported animals must have the highest sanitary guarantees.

I think one of the keys to the success of the Spanish pig farming sector is co-operation between companies, farmers and the government. Interprofessional organisations are equally important, such as Interporc and Anprogapor, and their excellent relations with the government, as those associations are partly responsible for establishing the guidelines to be followed by the sector. For instance, currently, both parties are bringing enormous pressure to bear on all piglet imports to ensure they comply with all the health controls when they enter Spanish territory. As for ASF, they have also implemented strict guidelines and co-operated closely with production.

ASF is a disease that spreads slowly. Barring the outbreak in Belgium, which is now almost fully controlled, ASF is located 2,000 kilometers from the Spanish border. Every precaution must be taken to prevent the disease, as ASF is not only transmitted through the wild boar, but also through pork shipments and flows of people. For example, some families travel to Romania, where more than 1,500 ASF foci were detected in 2019, and they return with sausages for their own consumption. This could be a risk factor, and must be controlled. 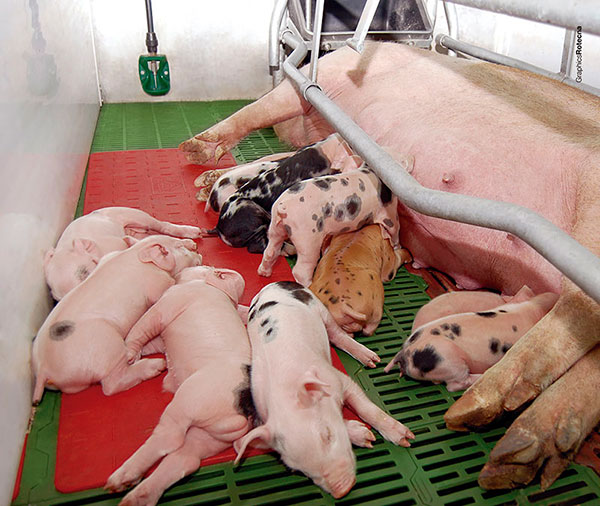 2019 has been a very good year, as Spanish pork exports have grown. Photo: Rotecna.

The export countries that are our most direct competitors in the international markets have tried to create a poor image of the Spanish pig farming sector by saying that we are  competitive thanks to malpractice, such as the excessive use of antibiotics. Our responsibility is to improve this poor image, and the best way to do it is to spectacularly improve our results, and this will occur in the ESVAC report for 2018. As another way to improve our image, the Spanish Agency of Medicines has prepared a report which it sent to the press describing the results of the Plan to Voluntarily Reduce Colistin.

Following a series of meetings held by the government through the Spanish Agency of Medicines and Medical Devices with the Spanish pig farming sector, a voluntary agreement was signed to reduce the use of colistin. The results were amazing, showing a reduction of over 90 %. In 2015, we maintained levels of more than 50 mg of colistin per PCU (population correction unit) and we are now at less than 2 mg/PCU in 2018.

Of course. Consumers usually receive bad news through the internet. The idea that we must sell is that never before has pork has as many sanitary guarantees as it does today. Spanish consumers can rest assured that the pork produced in Spain is free of antibiotic residues.

Slurry that is properly managed is a natural fertiliser that reduces the use of chemical fertilisers, but poor slurry management causes contamination. Society will be asking us to assume more and more responsibility in this respect. The pig farming sectors must be responsible and establish measures that reduce the impact of poor management, such as those already adopted by some regions, which have banned the extension of farms due to the high slurry saturation rate. In this regard, the Spanish pig farming sector must assume responsibility for its correct management.

Health is the main challenge. It is essential for the Spanish pig farming sector to be at the forefront of international health and one very important aspect of this is biosecurity. On the other hand, the growth of the sector must be responsible and sustainable, and include co-responsibility in terms of the environment and the use of antibiotics only for healing purposes. Lastly, the implementation of the pig production cluster will be an important aspect that will help us innovate in relation to food, handling and management, allowing us to continue as one of the leading pork production sectors worldwide.