Each time a crop is harvested, large amounts of nutrients are extracted from the soil. Consequently, plants must be fertilised to make sure proper nutrition is attained and to keep the land with adequate fertility levels.

Both public and private organisations encourage slurry as an organic fertiliser, not only because of its excellent fertilising capacity but also to close the nutrient cycle and promote a circular economy.

To use pig slurry as fertiliser, we must know its nutritionalcomposition,thevalueandfertiliser efficiency of each of them, the specific needs of each crop in each of its growth phases and its productivity per hectare. This will allow us to calculate the dose and application period to adjust the supply of nutrients to their extraction, after which, we must use an application method to ensure a homogeneous distribution.

Nowadays, there are fast and reliable methods to measure the composition of the slurry, even just before its application, in the same vessel that transports and applies it. The concentration of nutrients per unit volume of slurry varies depending on the farm, because of differences in water inputs.

The composition and concentration are affected by the stratification of phases in pits and ponds, as part of the solids sediment on the bottom and others float on the surface, the less soluble elements concentrating in the solid part such as phosphorus and organic nitrogen.

The critical factor in increasing crop production in soils with a general fertility index is nitrogen. Nitrogen is found in pig slurry up to 70% in an inorganic form (speedily absorbed by plants) and the rest in organic form (absorbed gradually, as it has to be transformed), which makes it suitable as a cover fertiliser once the crop is born, rather than just bottom before sowing. 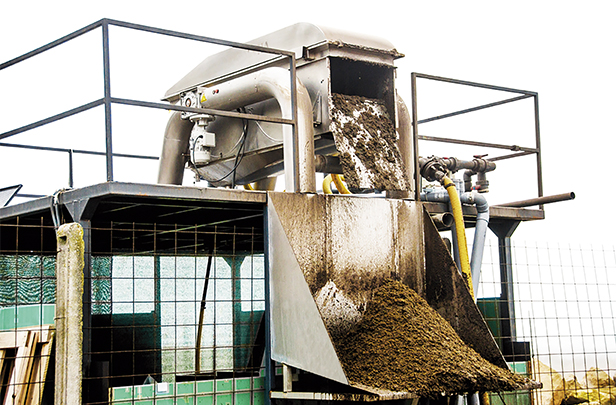 It is preferable to use application methods that distribute the slurry at soil level, such as hoses and injectors, which reduce nitrogen losses compared to fan while ensuring a more homogeneous distribution. In many crop types, with the best dosage based on the required nitrogen supply, the slurry provides more phosphorus than necessary which poses a serious dilemma in the long term, as it is a waste of this element, key for agriculture and of high strategic value. Despite being relatively abundant, there are very few sources of

phosphate rock, and it has a volatile price. The primary treatment to optimise the management and valorisation of slurry is a mechanical separation, where both a liquid and solid phase are achieved. This separation results in a redistribution and concentration of nutrients that improve its application as a fertiliser and avoids environmental problems. It is still the first step in any pig waste treatment programme.

Mechanical separation consists of passing the slurry through a sieve that removes up to 40% of the solids, leaving only the smallest particles, thus achieving the following benefits: