Many of us live in small rural communities with depopulation problems, where pig farming represents a fundamental part of the economy. Therefore, the evolution of the sector has a significant impact on our communities, where it generates about 300,000 direct and more than 1,000,000 million indirect jobs, but also on the Spanish economy in general, since the pig sector represents 1.4% of the national GDP and 14% of the Spanish industrial GDP.

Spanish pork production in 2019 increased by 2 % compared to 2018, making Spain the leading producer in the EU, closely followed by Germany, and third in the world after China and the USA. At the end of the year, the price per carcass was 40% higher than at the same time last year, with cost prices below the average of the previous ten years, leaving an average turnover of 0.28 euros/kg of per carcass. Therefore, we can say that 2020 has been a good year for the sector.

Figure 1. Specific weight in 2019 of exports in volume 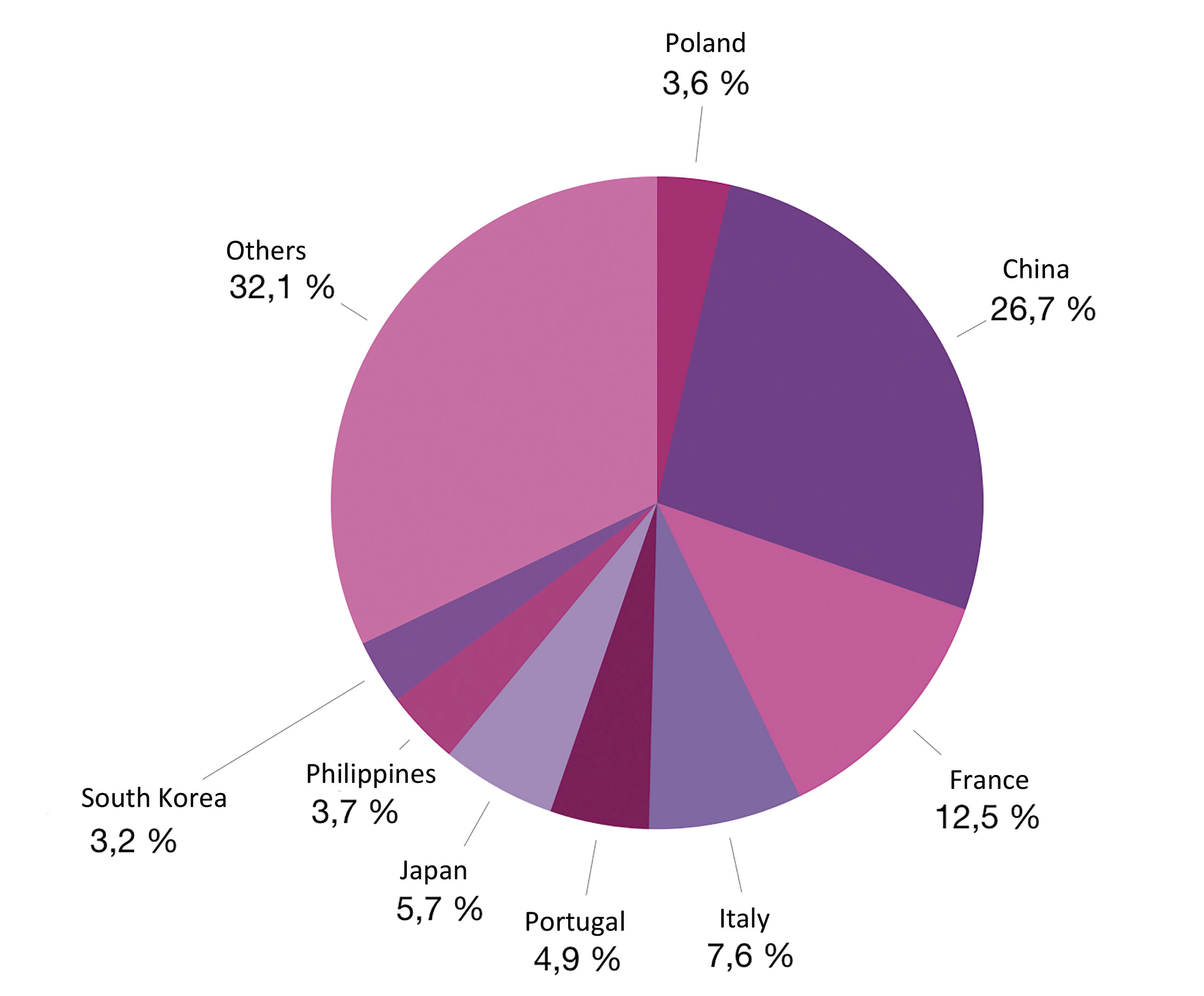 Each year, experts from the analysis and forecasting unit of the European Commission's Directorate-General for Agriculture and Rural Development produce a medium-term forecast of the leading agricultural markets and income, the EU Agricultural Outlook. The estimate makes a set of coherent and plausible macroeconomic assumptions, without contemplating the emergence of significant market interferences, such as changes in current trade agreements, extreme weather events, the occurrence of epidemics affecting animals, geopolitical events, etc. The analysis is based on the data available in September 2019 on agricultural production, on the agroeconomic models used by the European Commission and also on the forecasts on agricultural output made by the OECD and FAO.

The report for 2019-2030 starts by reminding us that consumer demands will continue to shape agricultural markets over the next decade. Beyond requiring lower prices for their food, increasing importance will be given to other aspects such as food security and health, the origin and social impact of production, the environment, climate change and animal welfare. This may lead to an increase in production costs. Still, it also represents an opportunity to generate added value to our products, differentiates ourselves from our competitors and increases market share and profits.

The African swine fever epidemic in Asia and Eastern Europe will continue to have a substantial effect on meat markets. China, the world's largest producer and consumer of pigs lost 25% of its production in 2019 and will continue to lose in 2020, down to 35% from 2018. Covering the deficit generated would require a doubling of all world pig meat exports by 2018, as it is equivalent to more than 80% of EU pig production. Growing demand for pork imports from China will continue to drive prices up. As China's pork production recovers, its imports and prices will fall. In any case, China is not expected to be able to recover production levels from 2018 until at least 2025, and may not have been able to do so even by 2030 (Figure 2). 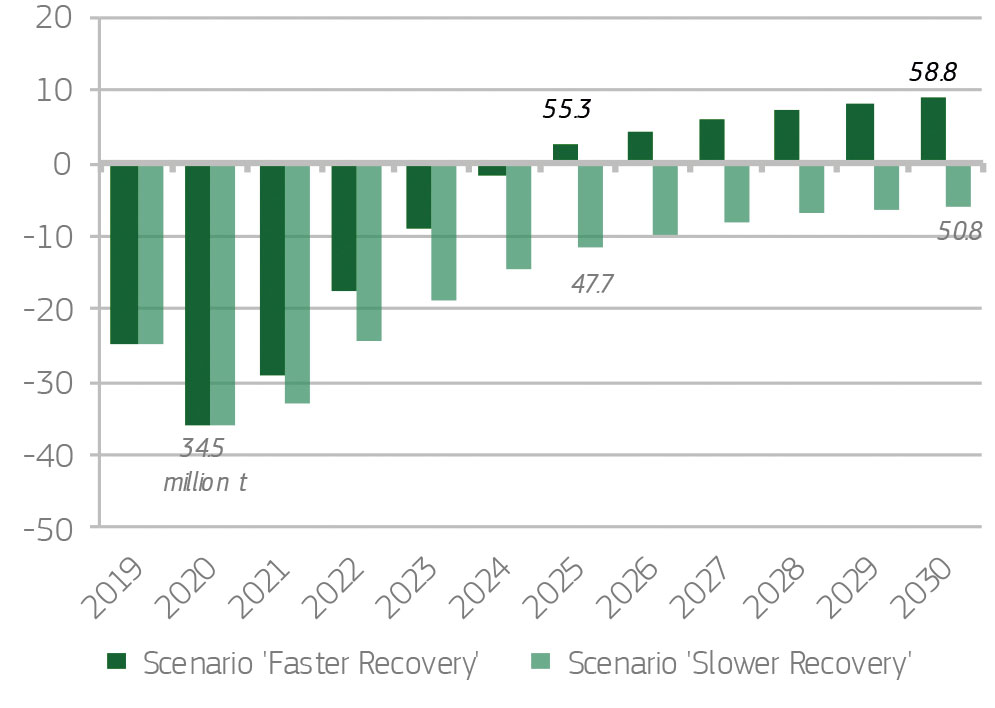 The high prices of pork in China will stimulate the search for alternative sources of animal protein, especially chicken. China's pork consumption per capita in 2020 will fall by 11 kg from 2018 and, if it recovers, it will not do so until 2030. This will be reflected in an increase in pork imports, which will peak in 2021, and then begin to decline, although remaining above 2018 levels, before ASF (Figure 3). 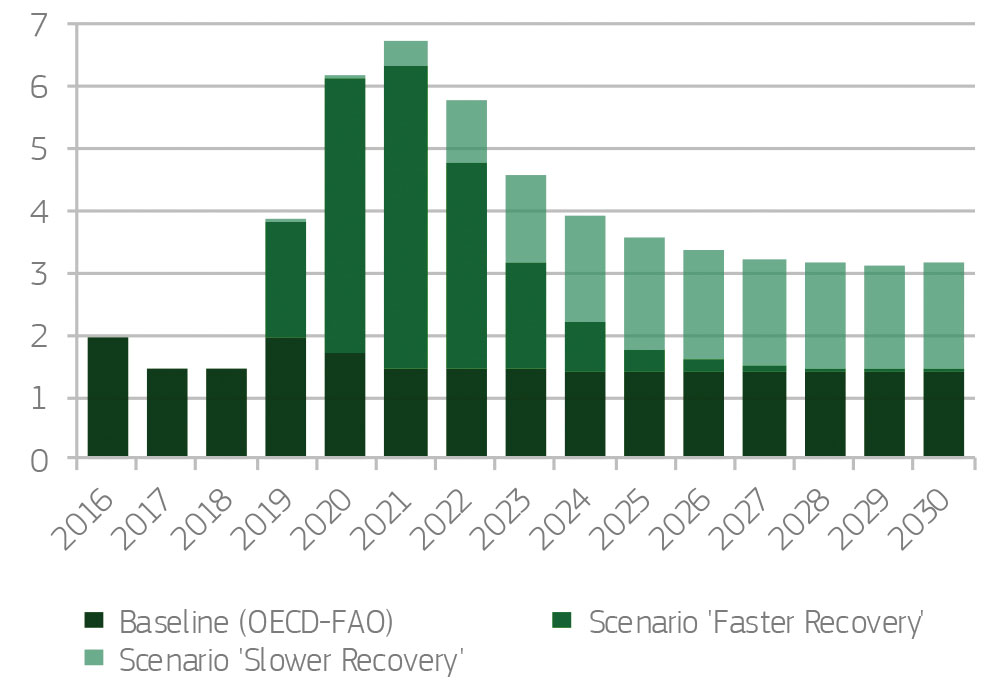 3. Meat consumption in the EU

Figure 4. Meat consumption in the EU by type. (kg) 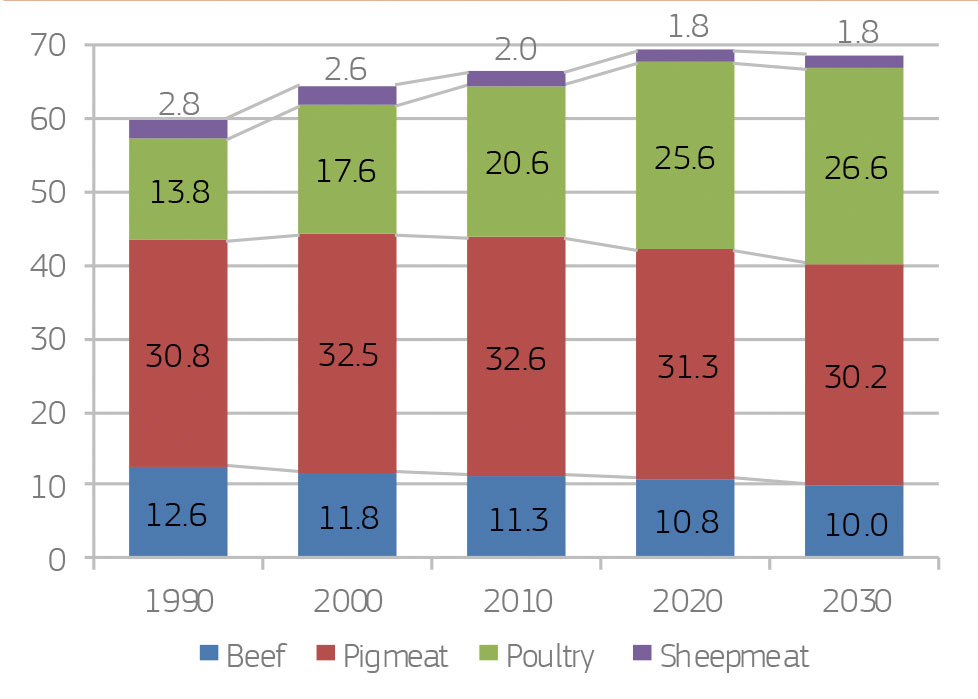 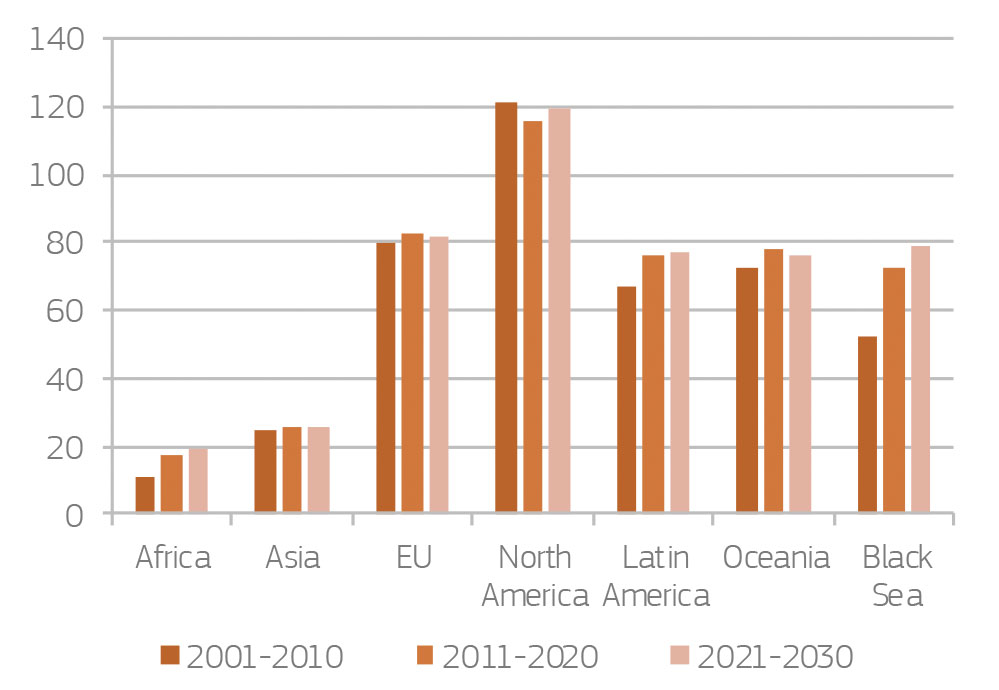 The production of organic products in the EU will continue to grow. Still, it will slow down because of the difficulty of implementing these techniques, which limit plant health treatments to be applied to crops and make animal welfare and medication standards stricter. The total agricultural area in the EU devoted to organic farming will increase from 7% in 2018 to 10% in 2030, an increase of 3% per year, less than the 5% annual growth recorded from 2006 to 2018. Production per hectare will increase, but imports of organic products will still be necessary. The increased availability of organic feed constituents will significantly increase production, doubling EU organic pig production to over 2% of the total output. Overall, demand for alternative products will increase more than the supply, creating opportunities both in the EU market and for exports.

Other trends in meat consumption must be taken into account, such as vegetarianism and veganism, the progressive increase in the use of processed meat and cooked dishes, and the emergence of laboratory meat. But for now, they do not seem to have a statistical influence on the decline in meat consumption. However, the differences in trends between countries make it difficult to analyse the data. In any case, these factors will most likely lead to a future decline in meat consumption, including pork, but it is difficult to predict when and in what percentage.

All these factors represent too many variables and uncertainties to make an accurate 10-year forecast of the evolution of pig production, so the data presented below should be taken with caution. In any case, it seems clear that demand will exceed supply, so prices will be high and there will be room for an increase in production worldwide.

In Europe, exports will continue to rise and will peak in 2022. Total pig production will grow by up to 6% from 2018 levels but, as the capacity to increase output is limited by environmental issues, especially in the centre and north of the continent. By the presence of ASF in the east, Spain is one of the countries most likely to take advantage of this growth opportunity.

As Chinese pig production starts to recover, prices and production in the EU will begin to fall, and will eventually drop to 6% by 2030, returning to 2018 production levels (Figure 6). This reduction in production should be concentrated in European countries with higher costs and environmental problems, so again Spain is at an advantage but at the expense of ASF developments in other EU producing countries with great potential, such as Romania and Poland. 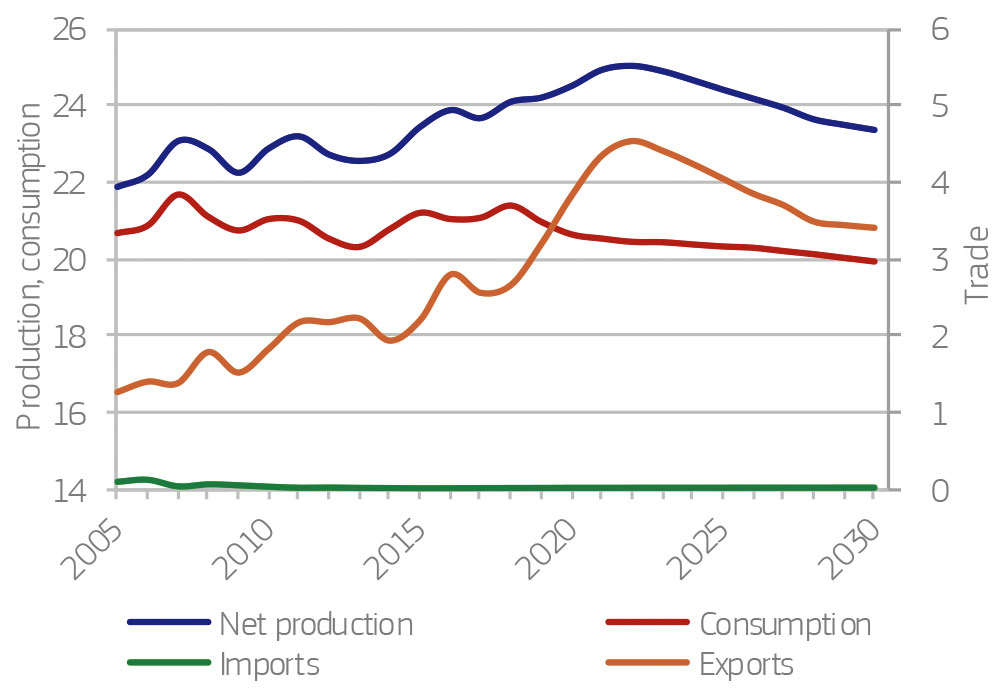 Pig meat prices should continue to grow during 2020 and remain high until Chinese pig production recovers, after which they may fall sharply depending on its recovery speed and how our leading competitors, such as the USA, Brazil and Canada, grow, and also on the evolution of ASF in countries with high production potential, such as Russia and Ukraine. Once the situation stabilises, prices should remain at 2018 levels for the period 2025 to 2030.

The drop in meat production in the EU will have a significant impact on the demand for feed, and the price of cereals will fall by up to 6% locally, with a consequent positive effect on costs. On the other hand, although global demand for feed will increase, cereal and soybean production is estimated to grow as well, and some stability in world prices is expected.

We can see that the price and cost of pork are at the mercy of what happens globally since both the price of pork and the price of cereals are determined by the balance between supply and demand at world level, so the future of our sector depends on many factors, both within and outside our borders, the progress of which we must monitor.

We cannot ignore the risks that lie ahead, such as health risks, especially ASF, which in the short term would force us to cancel exports outside of the community. We must, therefore, take all the necessary measures to prevent it from reaching Spain.

Concerning the challenges we have to face, such as environmental ones, the EU sanctions against Spain for not complying with the protocols for the reduction of emissions could lead to the application of emission quotas, especially for ammonia, which would force a decline in the pig population. For this reason, we must invest in having an increasingly sustainable sector.

Finally, we must not lose sight of the fact that other countries are more viable than we are in terms of cost, such as the United States, Canada and Brazil, so it is not enough just to produce more at a particular time of high demand. In essence, we must direct production towards the end consumer, adapting it to their needs and requirements and increasing the added value of what reaches the consumer, to ensure that they will continue to buy our products, even if they are more expensive.

ROTECNA uses first and third-party cookies.
The cookies of this website are used for technical and analysis purposes. Get more information and set your preferences HERE.