Glässer's disease, a classic in trend

Glässer's disease is caused by Haemophillus parasuis (HPS), a common bacterium in the respiratory microbiota of pigs. HPS colonises the upper respiratory tract at a very early age and infects the piglet in its first weeks of life, without causing disease, necessarily.

However, under certain circumstances, this bacterium is capable of causing significant respiratory problems, impairment and growth retardation at levels that can be very serious. It has always been an agent that has caused problems, but today it seems to be more out of control than ever, probably as a result of reduced antibiotic use in transitions.

1. Level of pathogenicity of the strain:

HPS is divided into 15 serovars and there is a relationship between the type of serovar and the degree of virulence. For example, serovars 1, 5, 10, 12, 13 and 14 are considered very virulent, while 2, 3, 4, 6, 7, 9 and 11 are not very virulent. However, this classification is not totally determinant either, since there may be certain strains within each serovar that have different pathogenic capacity depending on the virulence factors they present. A determining factor in the level of pathogenicity is the ability to escape the action of alveolar macrophages, since they inactivate non-virulent strains more efficiently than virulent ones.

2. Interaction with other primary infectious agents

HPS has the potential to cause problems on its own, as a primary agent. However, in most cases it acts as a secondary agent, since it needs primary infectious agents, such as PRRS, influenza and circovirus, to allow it access. These viruses activate immunosuppressive mechanisms that favour secondary infections. For example, PRRS and, to a lesser extent, influenza, affect pulmonary macrophages, which can cause low-virulence strains that would normally be neutralized at the lung level, to be able to reach the bloodstream. The influenza virus generates inflammatory reactions and alterations in the pulmonary epithelium, which help bacteria to join it and proliferate more easily.

A study carried out by Ovislab shows a relationship between the presence of nasal turbinate injuries and polyserositis injuries caused, among other agents, by HPS. We have already said that HPS is a common colonizer of the nose, so the destruction of the nasal turbinates facilitates its access to the lung. This rhinitis could be caused by infectious agents such as Bordetella bronchiseptica, Pasteurella multocida or cytomegalovirus and favoured by environmental factors (dust, poor ventilation, excess ammonia...). 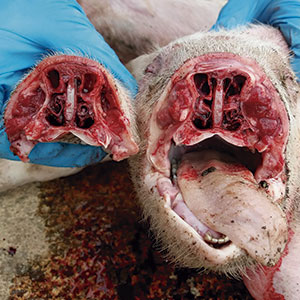 Rhinitis lesions open the door to secondary bacterial infections, such as Haemophillus parasuis.

Respiratory diseases are always more typical of cold seasons because thermal stress is often aggravated by the fact that, on many occasions, ventilation is compromised to compensate for the lack of temperature. The proliferation of gases, humidity, lack of oxygen and excessive animal density aggravate the state caused by infectious agents such as HPS.

The sow offers the piglet protection through colostrum and milk, but its own immunity is not generated until 4-5 weeks. This makes animals that are weaned within a few days more susceptible to infection. Although the current trend is to slightly increase lactation time, increased prolificacy often results in very high percentages of suckler sows which, when done early, reduce lactation time of many piglets.

5. Reducing the preventive use of antibiotics

The withdrawal of antibiotics from feed, especially amoxicillin, has increased overall problems in the transition phase on some farms and HPS is probably one of the agents that has benefited most from this reduction.

Once it reaches the lung, HPS can go into the blood and from there to different serous surfaces of the body. The serous membranes are wrappings that cover the organs to hold them in place and prevent friction between them. They cover the chest and abdominal cavity, the lung (pleura), the heart (pericardium), the abdominal viscera (peritoneum), the joints (synovial membranes), and the brain (meninges). HPS causes inflammation of these serous surfaces (pleurisy, pericarditis, arthritis, meningitis), sometimes in several of them at the same time (polyserositis), causing very characteristic lesions due to the presence of fibrin. However, a correct differential diagnosis is always necessary, because other agents such as Mycoplasma hyorhinis and Streptococcus suis can cause identical lesions. 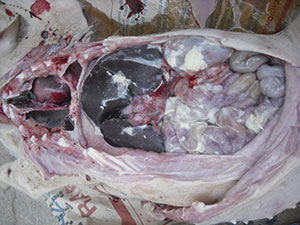 HPS mainly affects animals in the transition phase, although cases have also been described in adult animals, for example in high health replacements when entering commercial farms. The incubation period is 24 hours to 4-5 days. In acute cases sudden casualties without typical lesions may occur in less than 48 hours. In some cases focusing on the nervous system, it is also possible that no clear lesions are observed at the macroscopic level.

Affected animals are listless, have a fever (over 40°C), cough, dyspnea and runny nose. In cases involving the joints, these are inflamed and the animals find it difficult to get up. There may also be nervous symptoms when HPS reaches the meninges. Affected animals worsen progressively.

In the initial stages, the clinical picture is very similar to that of influenza and, as the animal degenerates, it becomes more like a deterioration caused by PRRS or PCV2. On many occasions, one or more of these viral agents overlap with the HPS infection, so the diagnosis of the process must be addressed at a global level.

HPS is a very labile agent, which survives very short time after the death of the animal, so its isolation must be done in very recent casualties (better in slaughtered animals) and the batch to the laboratory must be urgent. Isolation is essential to perform antibiograms but, at the diagnostic level, PCRs can be used, which have the advantage of widening the detection margin much more. HPS is a common upper airway agent and can even reach the lung without causing serious conditions. In fact, it is common to find several serovars affecting the same animal at lung level and not all of them will be the cause. For this reason its detection at this level is not conclusive and must always be detected at the level of the serous membranes, ideally associated with lesions, to obtain a definitive result.

In recent years we have worked hard on diagnosing influenza by assessing temperatures in animals, mainly in transition, and we have been surprised by the high number of animals with fever. In some of these cases the influenza virus was no longer present and the febrile process was prolonged for a long time, affecting animals that appear to be suffering from a rather chronic development. This suggests the presence of secondary bacterial infections, with the fairly likely involvement of infectious agents such as HPS.

In the current situation of antibiotic reduction, the control of HPS requires a global approach to the problem, taking measures against primary agents such as PRRS and influenza, and also against the causes of nasal turbinate injuries. It is also elementary to respect basic rules, such as environmental quality, TD-TF management, avoiding mixing of ages and origins, and combining it with a rational use of antibiotic treatments in a strategic way.