The administrations published a list of recommendations to reduce the need for routine tail docking of pigs. However, reducing pig tail-biting behaviour remains a challenge for many producers, who can only resort to docking of tails. To find out the origin of this behaviour and how to deal with it, we talked to Deborah Temple and Xavier Manteca, veterinarians from the UAB's animal behaviour and welfare group (FAWEC).

What is the current legislative framework on tail docking?

The European Directive 2008/120/EC states that farmers cannot use tail docking routinely and that it must be carried out when all the necessary measures have been implemented so that pigs do not bite their tails. Furthermore, the regulation states that all pigs, from maternity to fattening, must have access to efficient and appropriate manipulable material.

What are the leading causes of caudophagia?

Caudophagia or tail-biting is "abnormal" behaviour, as it has rarely been described under extensive conditions. For the most part, it is a redirected exploratory behaviour. A pig begins to explore another pig's tail without causing it any harm. This stage is considered a standard extension of foraging or rooting behaviour. Later, tail handling may result in skin wounds that are often bloody, and the problem is made worse because the blood attracts the interest of other pigs. In the vast majority of cases, caudophagia is not aggression.

Thus, if a pig is in a situation where it cannot root, for example, due to lack of space or manipulable material, it is very likely that it will manipulate the tails of its fellow pigs and cause injury. Similarly, environmental factors that can cause stress, discomfort and frustration in pigs can lead to an outbreak of caudophagia. For example, it has been described that subtle variations in feeding may cause a gastrointestinal injury that makes pigs more likely to chew and bite tails. It is also essential to consider that some pig genetics are more at risk for tail-biting, while others are much calmer in this regard. When tail biting is seen, it is an indicator that something is wrong, which probably means the animals are not well.

What effects can caudophagia have on pig production?

Firstly, animal suffering and minor infections. Secondly, the pain suffered by the bitten animal can lead to poor feeding, and this can have an impact on its growth. On the other hand, caudophagia can also lead to partial or total confiscation of the carcass, as some slaughterhouses no longer accept animals with bitten tails.

What can farmers do to prevent caudophagia?

Caudophagia is a multifactorial problem; that is, there is a very long list of risk factors that can cause it. The combination of causes that can lead to this behaviour changes from farm to farm, from shed to shed, from batch of animals to batch of animals, and from season to season. This makes this behaviour difficult to predict. In this regard there are two main points: 1) monitor, observe the animals and take corrective action before an outbreak of caudophagia occurs; 2) minimise the risk by controlling some well-known factors, such as density, feeding, ventilation and animal health. It should be noted that this problem may already occur in maternity. Even if no injuries are seen during the socialisation period of the piglets, the animals may already start to present the issue of biting tails. When they move to transition, if the animal density is very high, they do not have adequate handling material or ventilation is not optimal, the outbreak of capdophagia may expand, and then it is already tough to recover stability. Therefore, it is crucial to try to prevent these behaviours from the beginning, and as soon as it is seen that the pigs' behaviour is changing, corrective measures should be taken.

So, what characteristics must a farm have to avoid an outbreak of caudophagia?

The ideal farm is one that minimises chronic stress factors; that is, risk factors that are well known and will undoubtedly cause a problem of caudophagia. This gives us more room for an unpredictable stress factor, such as a change in ambient temperature, to appear at some point. If different risk factors are present on a farm, it will be easy for an outbreak of tail biting to occur, in one batch or another. One crucial thing to consider here is the density of animals. On slatted floors you should not go below 0.85 m2 per 100 kg PV animal, as working with lower densities is quite risky. On the other hand, special attention should be paid to feeding and also to ventilation. Another easy measure to implement is to give well-placed jute sacks at the transitions. 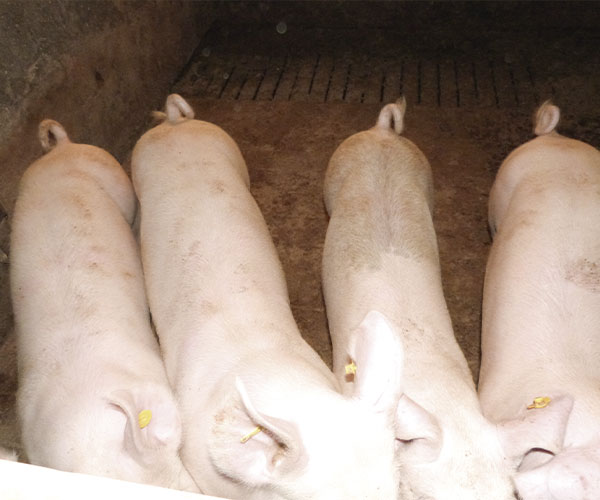 Farm with an adequate density that houses pigs without tails. Photo: FAWEC.

He mentions that one of the main factors to take into account is the density. From the point of view of production, what are the results?

The density change represents one of the most critical challenges for the Spanish pig sector and also a change in working routines. Leaving aside the problem of caudophagy, it has been shown that the economic target is obtained with the density mentioned above (0.85 m2 per animal of 100kg PV and on slat). When working with tighter densities, problems appear, including weak growth, with the expense of feed that this entails and the health problems associated with environments loaded with ammonia and other irritant gases. Returning to the subject of caudophagia, it is quite illusory to think that one can work with high density and pigs with whole tails.

Are there alternatives to tail docking?

The main alternative is to have a well-prepared farm with all the preventive measures already mentioned. Once all these measures have been implemented, the risk of caudophagia is reduced, and it is possible to contemplate inserting pigs without their tails being cut off, as long as the caretaker knows his animals very well.

What is the future of tail docking in Spain?

There will be more and more pressure from the administration. In Europe, this is an issue that has already been legislated for. On the other hand, there will also be increased market pressure in response to social concerns about animal welfare. Raising pigs without tail docking is a challenge that means significant changes to pig housing conditions and management. Some professionally managed farms are achieving this.